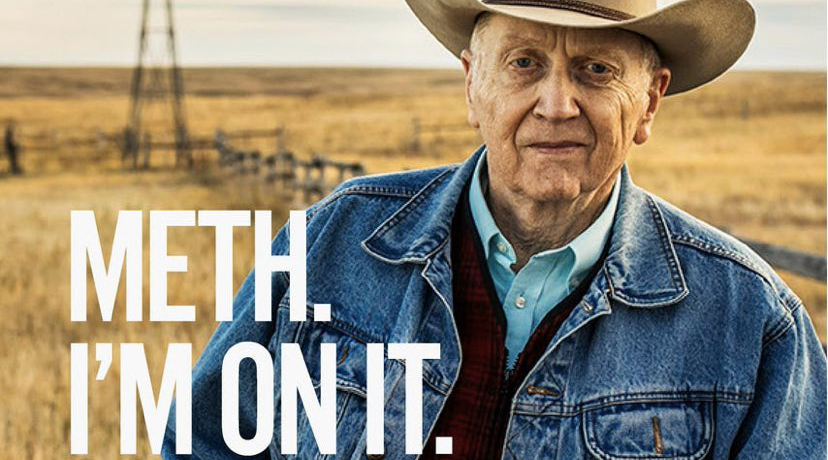 When you’re trying to get people off drugs one would think that it’s really the thought that counts more than anything, but execution matters too. Otherwise what the hell was the point? It would be insane to treat someone working tirelessly in a methadone clinic the same as a YouTube star dabbing for 24 hours straight to fight against “pills”. You don’t get a free pass on judgment because your heart was in the right place.

Enter South Dakota‘s anti-meth campaign. It’s an undeniably noble effort. The state has more meth users than buffalo (I might need to fact check that) and they’re finally doing something about it. But, um, the marketing team might end up taking some heat for the branding.

The state of South Dakota spent $500k on an ad campaign to let everyone know we’re on meth pic.twitter.com/TjAycDtjut

South Dakota spent nearly half a million dollars of taxpayer money on an anti-meth campaign.

Let’s work from the inside out, here. Before we even get to the surface level awkwardness of “Meth. We’re On It” as a slogan the actual meaning of said slogan is muddled. The campaign has a fairly clever idea in expressing that, because so many people in South Dakota do meth, it’s everyone’s problem. Having a little girl say she’s on meth in your video ad is still weird, but it’s a solid idea.

The issue is that it appears that the campaign is also saying that South Dakota is “On Meth” or “On It”, as in, they’re ready to address the problem. So they’re both on meth in the sense that, spiritually, the entire state has been cleaning its house for thirty-six straight hours, but they’re also ON IT, man. Because they got this. They’re gonna kick ass at getting rid of meth. Just pick one.

And then there’s the optics of saying you want to stop being/being known as the state where everyone does meth (Missouri thanks South Dakota for voluntarily taking up this mantle) by saying “Meth. We’re On It” inside the silhouette of your state. This feels… counterproductive?

Also, making all the people in the pictures look like proud, unashamed users of a new erectile dysfunction pill was an odd choice.

After all the online backlash South Dakota Governor Kristi Noem defended the half-million-dollar campaign on Twitter.

Hey Twitter, the whole point of this ad campaign is to raise awareness. So I think that’s working… #thanks #MethWeAreOnIt