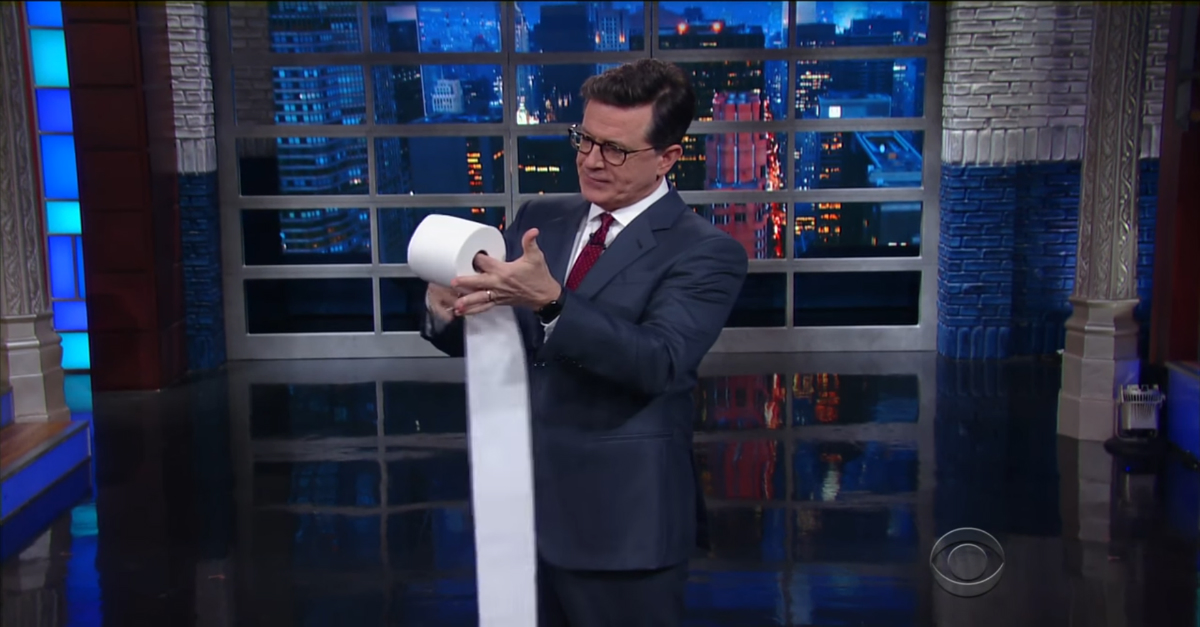 On Monday evening’s “The Late Show,” Stephen Colbert used his opening monologue to mercilessly mock President Trump and his behavior during his first 100 days in office.

Trump marked his first 100 days as president with a series of interviews, telling Reuters he thought being the head of state would be easier than being a business man/reality TV star. He also stated that he missed his old life. ?We all do sir,? Colbert joked at the top of the show.

Colbert also highlighted some of the more bizarre moments of Trump’s interview with “Face the Nation’s,” John Dickerson, like when Trump awkwardly walked away from Dickerson and went over to his desk to pretend to shuffle papers when he didn’t like Dickerson’s line of questioning.

In response to Trump telling Dickerson that he called the interviewer’s show “Deface the Nation,” Colbert went in hard: “?Donald Trump, John Dickerson is a fair-minded journalist and one of the most competent people who will ever walk into your office, and you treat him like that?? Colbert told the president. Since Dickerson has ?way too much dignity to trade insults with a president of the United States to his face,? Colbert decided to do it for him. ?I sir, am no John Dickerson,? he said.

RELATED: Samantha Bee called President Trump a ?geriatric orangutan? on her hysterical ?Not the White House Correspondents? Dinner? ? and she didn?t stop there

?When you insult one member of the CBS family, you insult us all!? Colbert began. ?Mr. President, I love your presidency, I call it ?Disgrace The Nation.? You?re not the POTUS, you?re the ?gloat-us.? You?re the glutton with the button. You?re a regular ?Gorge Washington.? You?re the ?presi-dunce? but you?re turning into a real ?prick-tator.??

“Sir, you attract more skinheads than free Rogaine,? he went on. ?You have more people marching against you than cancer. You talk like a sign-language gorilla that got hit in the head.? And cam the big one: ?In fact, the only thing your mouth is good for is being Vladimir Putin?s cock holster.?

Colbert then dealt the final blow: a recreation of Dickerson’s interview, with Colbert asking the questions so he could insult the president to his face.