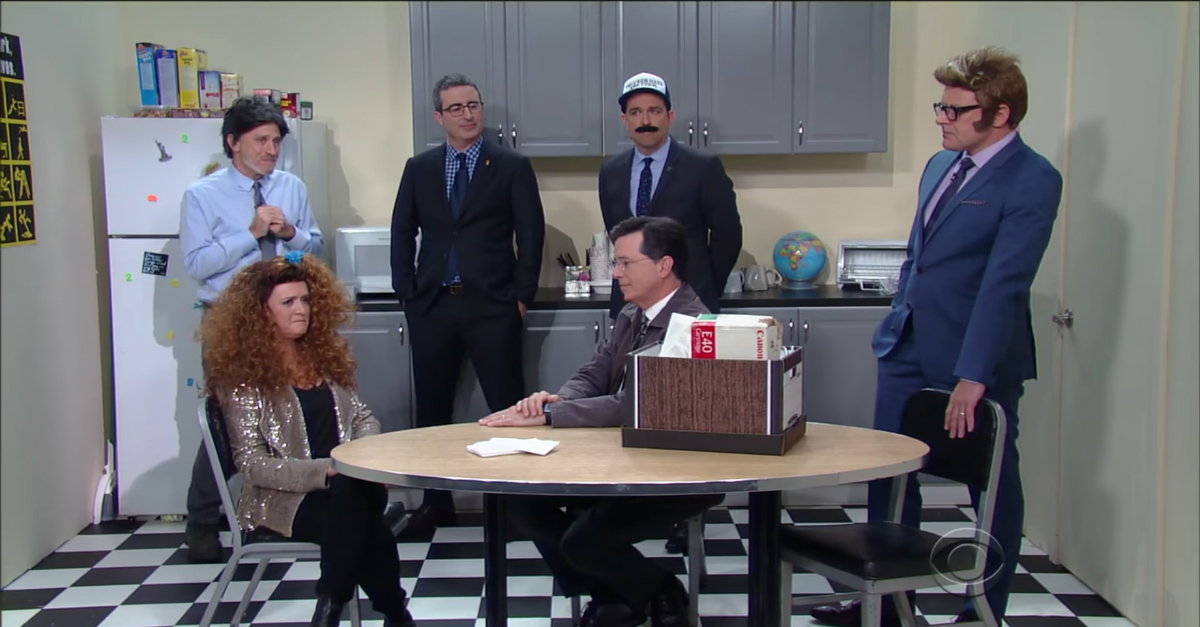 Stephen Colbert held an epic “Daily Show” reunion on Tuesday night. The host of “The Late Show,” managed to get the whole gang back together again after years apart.

We got the band back together! pic.twitter.com/stqXLlGiUd

The show opened with Stewart making a large  sandwich for current host of “The Daily Show” Trevor Noah, who was smashing a bunch of buttons while waiting for Stewart and Colbert to deliver his lunch to him on a silver tray.

Later in the show, Colbert had a flash back to his last day at “The Daily Show” in 2005. As he packed away his iBook and lucky Steve Carrel mug, Samantha Bee — wearing a perm and sequined jacket — walked in to declare her surprise at Colbert’s decision to leave during George W. Bush’s presidency.

“There’s never gonna be another president this good for comedy,” she said. “I mean, this guy does something ridiculous at least once a month. I know there’s one thing for sure — there’s no scenario under which I will ever say, ‘God, I wish George W. Bush was president.’”

A less-bald Rob Corddry and a trucker hat-wearing Ed Helms then entered, and began to fight over which one of them would inherit Colbert’s office. Next, John Oliver appeared claiming to be former “Daily Show” correspondent Steve Carell.

Jon Stewart was the final member of the team to arrive, revealing that he’d been hiding in the refrigerator the whole time. He congratulated his former underlings on “spreading their wings” and the gang ended their meeting with their “usual pre-show prayer”: an enthusiastic cheer of “Go, liberal agenda!”

The show then switched gears and became more of a traditional talk-show, with the team joining Colbert on the couches to talk about old times and discuss current political events.