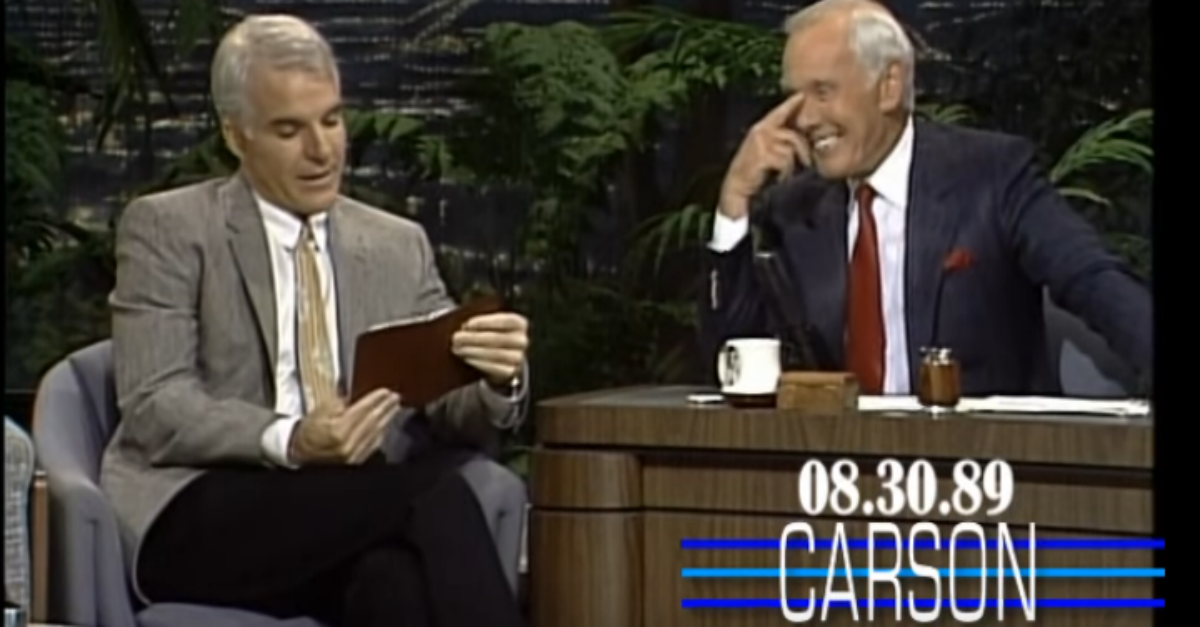 While Steve Martin is still a household name, he used to appear on television more frequently. In this classic clip from Johnny Carson, on The Tonight Show Starring Johnny Carson, the late night talk show host mentions that Martin had appeared on the Antenna TV program 66 times over the years.

To that, the comedian and actor confesses that, to keep from repeating himself, he recorded funny memories of his funny jokes and original content in his diary that he keeps on his person. Martin then unveils his diary and reads his personal musings about his appearances on the show.

During the Johnny Carson interview, it seems that every entry, Martin has high praise for the audience and Carson’s sidekick, Ed McMahon, but repeatedly, the comic characterizes Carson as “sluggish.” In one entry, Martin admits, “I was bad, real bad, but compared to Johnny and Ed, I was fantastic.”

You never know what you’re going to get when interviewing people who are capable of stand up comedy. Bloopers and outtakes don’t exist on these kinds of episodes on the Tonight Show with Johnny Carson, and the funniest moments can be remembered if you want to watch Carson episodes on Youtube.

Johnny Carson interviewed the funniest people on this show. Robin Williams, Jonathan Winters, Tim Conway, Don Rickles, and many more appeared. But I think this was pretty clever of Steve Martin to whip out for the show. And the way he executed it was perfectly appropriate, compared to some of the skits or pranks that other comedians come up with. Diaries are supposed to be private conversations with yourself or the paper or whatever you feel like you’re talking to while you’re jotting down your thoughts.

It would be kind of nerve-wracking to share on live television, but if it’s funny, who cares? Steve Martin clearly didn’t.

Editor’s note: This article was originally published on March 8, 2017.