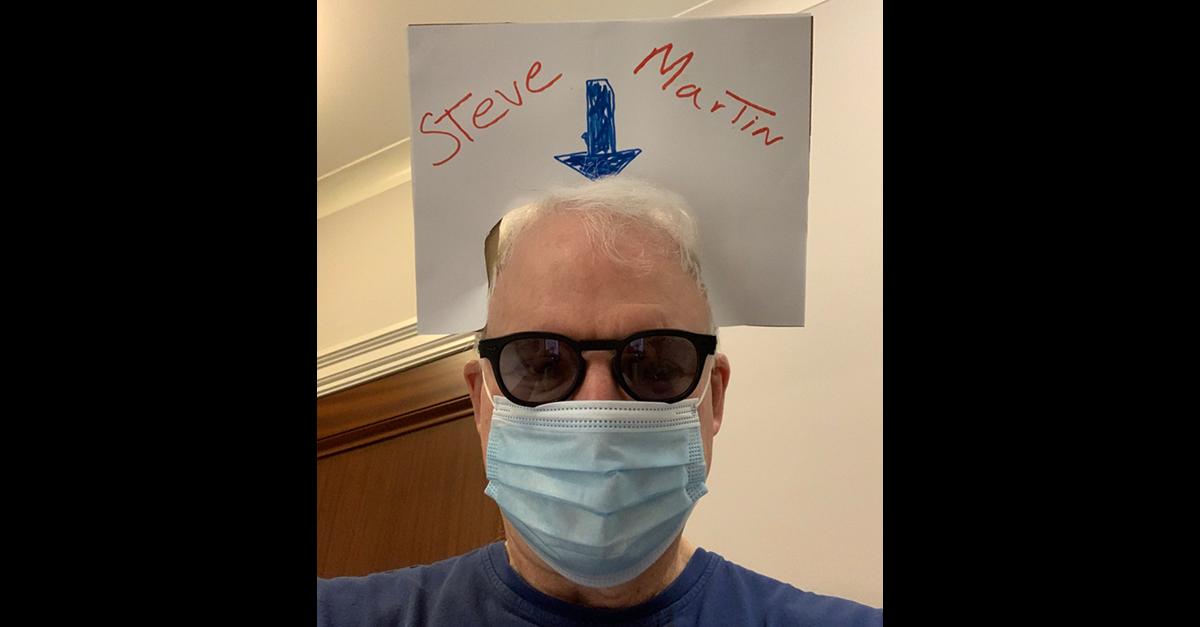 One of the most overlooked victims of the COVID-19 pandemic have been America’s celebrities in need of constant validation. While the mainstream liberal media have focused on the elderly and nursing homes, the unemployed, and the dead, our nation’s beloved famous people have been suffering great mental distress. No one can recognize them and shower them with adoration because their Coronavirus face masks make them unidentifiable.

Enter the most important and special celebrity who ever lived and, thus, I assume, the most in need of attention: the great Steve Martin. The Planes, Trains, and Automobiles star and one of Saturday Night Live‘s most beloved hosts took to Twitter to show how his fellow love-starved celebrity pals can avoid being mistaken for some plebian kindergarten teacher or filthy nurse get the praise they need in these tough times.

I always wear a mask when I go outside. But something about it was leaving me anxious and unsettled. I thought about the problem, addressed it, and here is the solution. pic.twitter.com/aUW4jHI3dX

All kidding aside, this is a pretty fantastic demonstration of the brilliance and joy that is Steve Martin comedy. It’s sweet, it’s dumb, and a little cutting and satirical but not nearly so much that you feel like it’s pessimistic. Classic Steve.

All of Twitter loved it as well, with users saying, “@SteveMartinToGo still going strong after all these years” and “The king of comedy has F*cking done it again boys.” One woman even commented, “I’d still do this man.”

Congrats on that one, Steve.

This fun little bit reminds of another brilliant Steve Martin story that comedian Sarah Silverman shared on the Howard Stern show a few years ago about a joke he told while she was having dinner at his house. Essentially, the dinner table was filled TV and movie legends like Martin Short, Candice Bergen, and Martin himself (along with Silverman of course). Apparently, Martin dropped a line so funny and simple and perfect that Silverman remembers it to this day.

The guy is truly a national treasure so for the love of God and Steve Martin SOMEONE RECOGNIZE THIS MAN ON THE STREET.