Someone Bought A Stuffed Whale Penis For $6,000…Because Why Not? 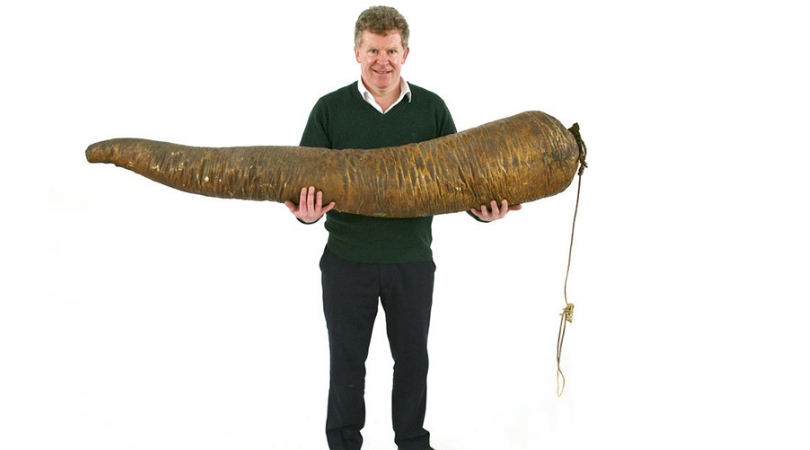 You know how they say that everything has a price? Well, that is most certainly true, and this 18-pound taxidermied sperm whale penis is the perfect example of it. Turns out, Sworders, an auction house in the United Kingdom, decided to auction off a whale penis from the late 19th century, as part of their “Out of the Ordinary” exhibit.

Mark Wilkinson, a specialist at Sworders, said he was very excited when the item was consigned to the auction by a private collector, who had the penis for 20 YEARS!!! Standing (or laying?) at 167 centimeters, it’s nearly five and a half feet long and nearly one foot wide at its thickest part. Surprisingly enough, it’s actually not heavy, weighing only 18 pounds, which allows someone to pose comfortably for a one of a lifetime photo. That is some quirky home decor.

What is the penis stuffed with? Hair. Experts aren’t really sure what kind, but they believe its horse hair. The vendor told him that in days of yore, sailors were said to store tobacco in whale penises such as the one sold, to keep the tobacco moist and fresh over the duration of a long journey. So, maybe this was also one of the reasons many people wanted to kill Moby Dick?

Wilkinson said deciding on a price to auction off the penis was difficult since there was nothing to go on, but was able to find a similar item at Icelandic Phallological Museum. Sworders, which specialize in art collections, ultimately set the price around donor’s suggestions ranging between $4,500 and $5,800. The penis sold for just over $5,900.

This isn’t the only “odd” item for sale that has made major headlines. ‘Out of the Ordinary’ sales also included a stage outfit from Michael Jackson’s 1992-1993 Dangerous tour (sold for $20,000), wing tips from a Cathay Pacific 747, French postcards depicting a Witches’ Sabbath, and Ice Age cave bear skeleton from Austria or Romania (sold for $16,600), a full-mount Canadian polar bear (sold for $25,500)and a Victorian watercolor of two men dressed in drag.

This is truly impressive. I need to make a trip to Sworders.

Watch: A Killer Whale That Can Almost Speak