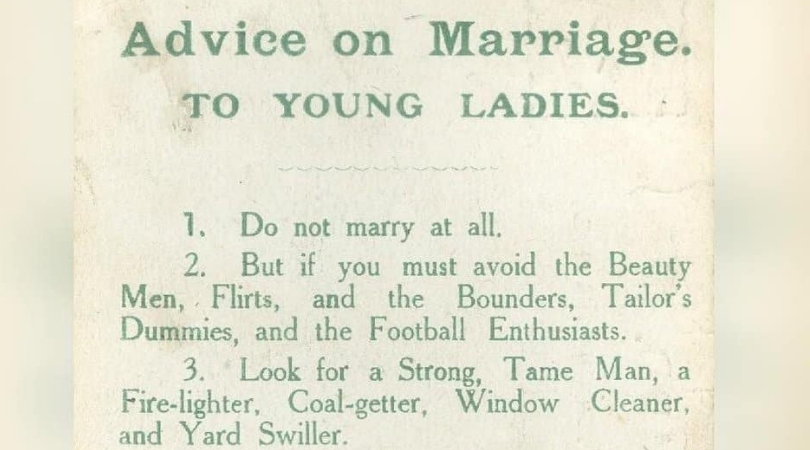 Let me tell you a love little story. I have a history of online dating. Tell me an app and I’ve used them all. I met one of my ex-boyfriends through there, and in the middle of the relationship, decided that he was crazy, and of course, ended it. But, you know, it worked for a bit. When I moved cities for work, I decided to give it another go, because well, meeting people in your mid-twenties by yourself is hard.

So I did. 8 months in, I can safely say that I have quit online dating for a long, long time. It’s not worth it, you invest too much of your time, and it’s exhausting. Of course, it might work for others, but for me, yeah, I’ll pass. But, that’s not to say I don’t take advice from others about what to do or “how to meet a person”.

You see, when it comes to dating and marriage, were all pretty skeptical about the advice we receive. Every relationship is different, sure, but there is no shortage of dating advice in magazines, online, or even in movies. (Shout out to He’s Just Not That Into You and The Notebook.) We are so caught it in the whole concept of relationships, which is to date, get married, have kids, become grandparents, and so on, that sometimes we get sidetracked. This is why divorce happens, because we force ourselves to follow the social norm of relationships and life, without actually enjoying it.

Now, don’t get me wrong, I’m a total sucker for romance, and hope, and all of that mumbo jumbo, really. But my point here is, sometimes the advice we get from people might work for someone, but might not work for another. That’s when I found this beautiful gem of advice, just roaming around Instagram. And all my problems seemed to go away. Because, what better advice than from the ones that started everything, The Suffragettes.

Marriage advice for young ladies from a suffragette, 1918. The pamphlet is on display at the Pontypridd Museum in Wales. The suffragette is unknown.

Sure, they fought hard for their right to vote and be strong independent young women, but they also fought for equality when it came to men and women. Hence, the “Advice on Marriage To Young Ladies”. It truly is a hilarious piece of marriage advice that was probably created in 1918, but hey, still very very relevant today. It’s scary.

Okay, who hurt this Suffragette wife, and why has she become my new role model? The fact that the Suffragette’s advice started with the whole, don’t marry at all, really brings everything together. That’s a big bold statement for sure. She then goes on to write about the different type of men to avoid in which today can be classified as the modern-day fuckboys.

In case you don’t know what fuckboys are, the definition (according to the Dictionary.com) is:

I mean, she referred to them by giving them all separate names, but Fuckboy definitely sums all of those up, right?

She then continues to write about decent marriage prospects, telling us to choose a “strong, tame man” who is involved in, let’s say practical processions, such as a Coal-getter, Window Cleaner, Fire-lighter and Yard Swiller. To be honest, I’m not quite sure what a Yard Siller is, but I mean, sure, I’ll take it.

What I loved the most about these rules was the fact that even back then, women knew how to tame men with just one thing: food. It’s hilarious! Feed that brute and he’ll be yours for life. Admit it, name me one guy who doesn’t love food, it’s impossible.

This United States’ document is over 100 years old, but you know what, it resonates with today so much. These women really just wanted to find a nice man to be with and at the same time help other women around them. I don’t’ know, seems to me like we’re still stuck in the 1900s.

If only there were rules for Tinder. I was definitely born in the wrong era.

Watch: High School Principal Reassigned After Saying The Holocaust Was Not a ?Factual, Historical Event?