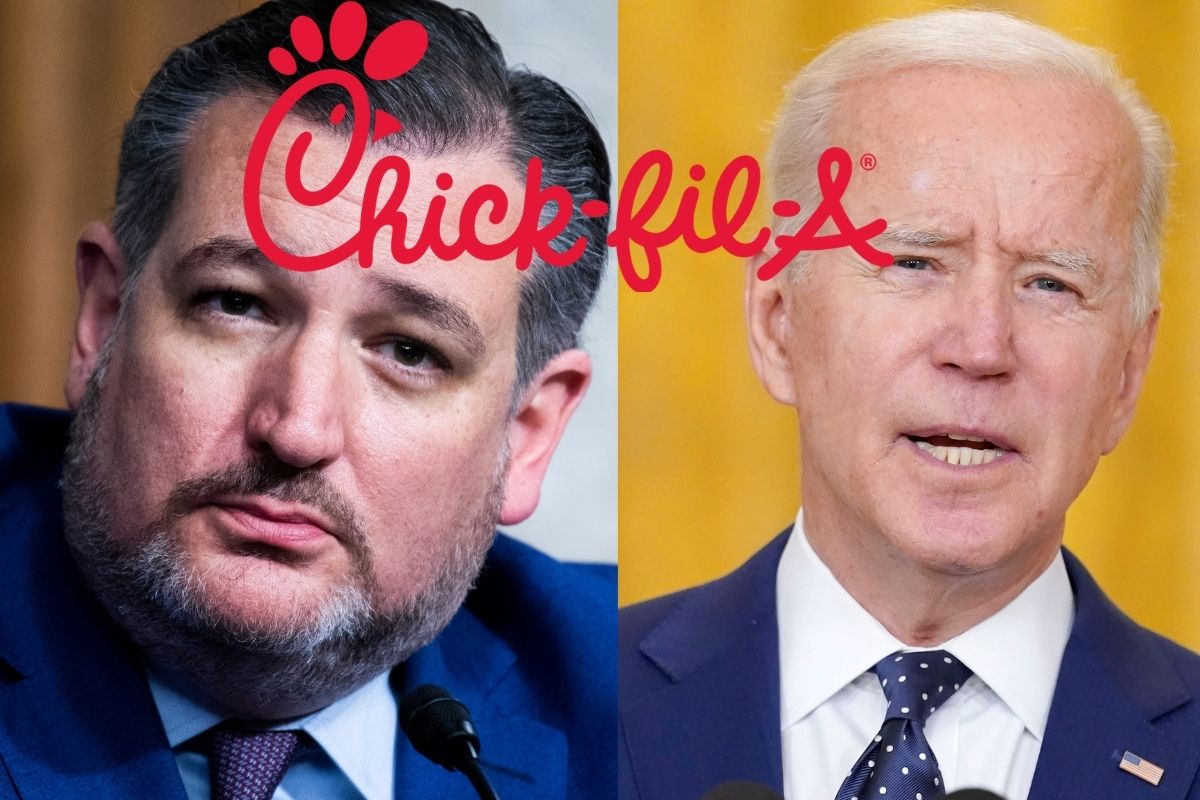 You really can’t make this sh*t up. Senator Ted Cruz of Texas — yes, the one who just went viral for fleeing his home state for Cancun during a deadly blizzard — is now getting roasted online again. This time for, inexplicably, blaming Joe Biden for the current sauce shortage at Chick-Fil-A. Blame aside, is it really any surprise that Cruz loves the chicken chain infamous for donating to anti-LGBTQ charities? Oh, Ted.

One thing’s for sure: Sen. Ted Cruz knows how to stay trending. Maybe after four years of fan-girling over Donald Trump, he’s finally taken a page out of the how-to-troll book. On May 12, the Republican lawmaker tweeted the link to a Breitbart article which described a shortage of sauce at Chick-Fil-A, entitled “Chick-Fil-A Limits Sauces Per Order Due To Shortage” with the simple caption: “Joe Biden is destroying America.” Questions abound.

Since the hack of the Colonial Pipeline, the country’s widespread gas shortage has dominated the news cycle… but it seems there’s another serious shortage receiving little attention: Chick-Fil-A sauce! You know it: those plastic, rectangular receptacles full of creamy orange goodness. Just a little tangy. Just right: it makes the sandwich. So when issues in the supply chain, resulting from the Coronavirus pandemic, caused Chick-Fil-A locations to limit their dipping sauce to one-per-customer, people were going to get upset. (We’ve seen Chick-Fil-A brawls before.) And it’s also no surprise that Ted Cruz is one of them. I mean that guy definitely seems like he asks for extra sauce. But how does President Joe Biden factor into it?

Well, lately industry-wide supply chain issues have affected Chick-Fil-A and several other chicken restaurants including KFC, Buffalo Wild Wings, and Wingstop. Demand remains high, even as other stops in the supply chain are hindered by other pandemic snafus… namely, in enough hiring workers. Throughout the pandemic, employment at fast food restaurants has taken a severe hit. With lower wages than other industries, many workers who found themselves laid off during the pandemic have yet to return back. As Covid-19 vaccines have allowed the country to open up again, reports on America’s labor looming shortage are gaining more attention.

Additionally, there is a ketchup shortage due to the increased need for individually wrapped ketchup packets. A more sanitary option than sharing any communal ketchup bottle, Heinz has been in crisis-mode to keep up and reported a 25% increase in production over the past year.

We can assume that these systemic problems are what Cruz was referring to in his pithy (and petty) tweet. (The brief Breitbart article made no mention of them, however.) And who knows? Maybe Cruz’s comment will become like the next “Thanks, Obama.” I honestly hope that by Monday, Fox News is running 24-coverage determining Biden’s exact role in the Chick-Fil-A’s dry poultry debacle. Marjorie Taylor Greene might have a conniption.

As you can imagine, Ted Cruz’s public dedication to any fast food chain would make for some late night comedy fodder. “If you’re looking for a president to blame for your dipping sauce shortage, this is your guy,” Kimmel announced, laughing. See the picture that paired with his punchline below.

And it’s no different on social media. Tons of tweets have already appeared calling out the Texas senator.

Have At It, Internet

ted cruz when he’s limited to only one chick fil a sauce packet: https://t.co/CG9lBpSeTl pic.twitter.com/6HfjA2AS3e

If Ted Cruz goes to Cancun during this CRISIS, he will not receive my vote in 2024 pic.twitter.com/Bg1QKeEp2V

BREAKING: Ted Cruz upset he can no longer bathe in Chick-fil-A sauce due to shortage and blames Joe Biden https://t.co/vmAP3MCYuA