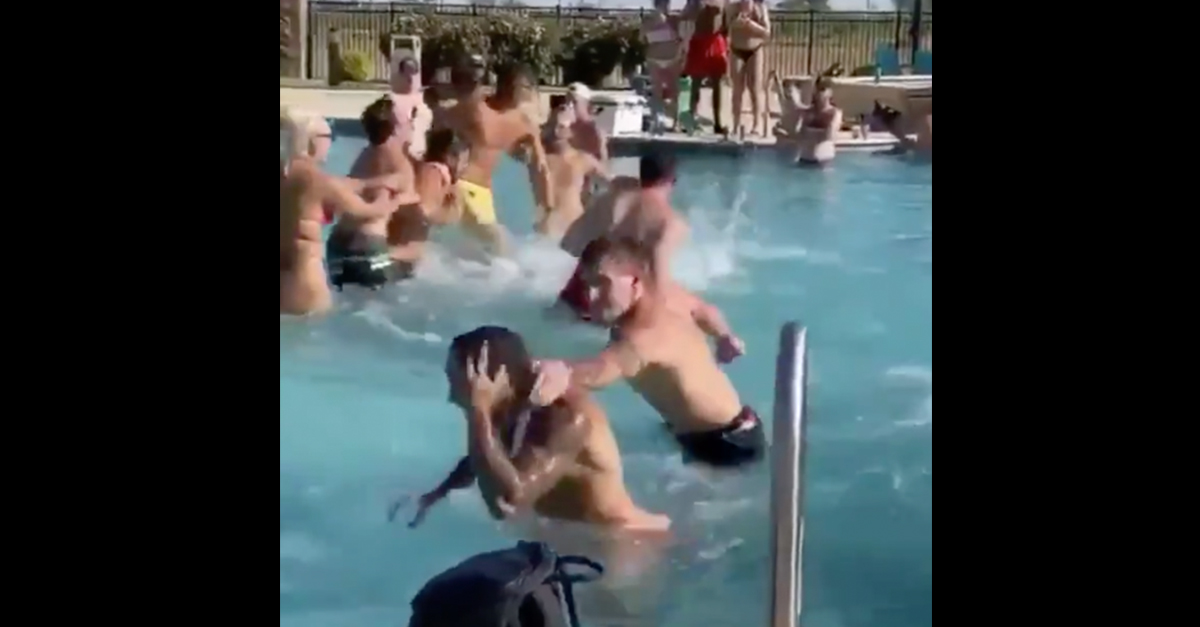 A large group of people in Lubbock, Texas — presumably mostly if not entirely Texas Tech University students — gathered at a pool on a hot summer day to beat the heat and apparently also each other. The only thing that wasn’t getting beaten on this hot afternoon was Coronavirus. Not at all.

In the video the kids are seen middling around the shallow pool in small groups before a fight breaks out between two bros. Eventually the fight spreads to other bros. Punches are thrown. Dudes are choked out. At least five people are filming. Random people are yelling stuff but I guess no one shouts, “World Star” anymore, which is depressing. And, of course, at least one girl is trying in vain to stop the entire thing.

Then, of course, at the end of the video, the bro filming turns the camera around and is like, “lol wtfffff!”

According to one person who replied to the tweet sent out by Old Row Texas Tech, the fight occurred off-campus at the Republic at Lubbock apartment complex, and that these sorts of parties have been happening regularly. “Yes management has been allowing these pool parties all summer despite outbreaks at the complex by people who have been attending the pool gatherings.”

1. It’s pretty tight that all these kids don’t give a shit about spreading COVID-19.

2. But then again, no one who is willing to get into a White Claw fueled wading pool fistfight has ever had much concern for the well-being of themselves or others. Even if there wasn’t a pandemic they’d still be out there punching faces and getting their faces punched in turn, increasing their risk of skin cancer, turning their liver and kidneys black, and probably finding someone to give the clap to, or get it from. (I know. Minus the face-punching and clap-giving I’ve partaken in this regularly.) So at that point why worry about some bat germs?