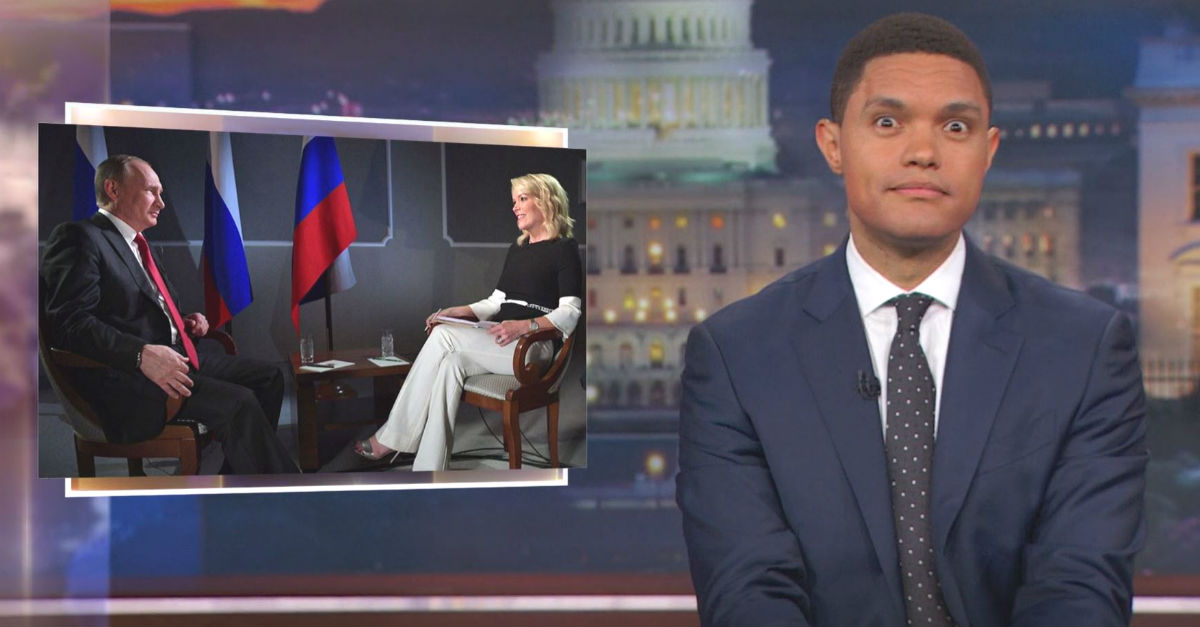 While Megyn Kelly has been off the air for a few months now, “The Daily Show” has been going strong, attacking President Trump’s administration on a nightly basis.

On Monday, the show dug into Kelly’s return to television on Sunday night with a blockbuster interview with Vladimir Putin.

RELATED: “The Daily Show” meets with a ridiculous governor candidate who can’t stop talking about doing the dirty

Host Trevor Noah began by applauding Kelly, saying, “Kudos to Megyn, because she did not hold back.” He played a few clips of the interview in which Kelly jabbed aggressive questions to Putin concerning his leadership style and the Russian hacking in the 2016 election.

Putin was visibly unsettled by the questions and reacted as one might expect the second most powerful man in the world to, at one point saying, “Your lives must be boring.” A number of outlets observed that Kelly was outmatched by Putin.

“The Daily Show” also brought on correspondent and comedienne Michelle Wolf, who quickly dug into Kelly, saying, “Last night on her new show, [Megyn] acted like she didn’t spend the last 12 years of her life in Fox News’ culture war.” She attacked Kelly consistently for trying to reinvent herself on MSNBC, and rolled out clips of Kelly’s more notable moments on Fox, including the instance when the host claimed that Jesus was “white.”

Wolf closed by joking, “Sorry, Megyn, you?re not the new Barbara Walters, you?re that Sprint/Verizon guy who follows the money.”