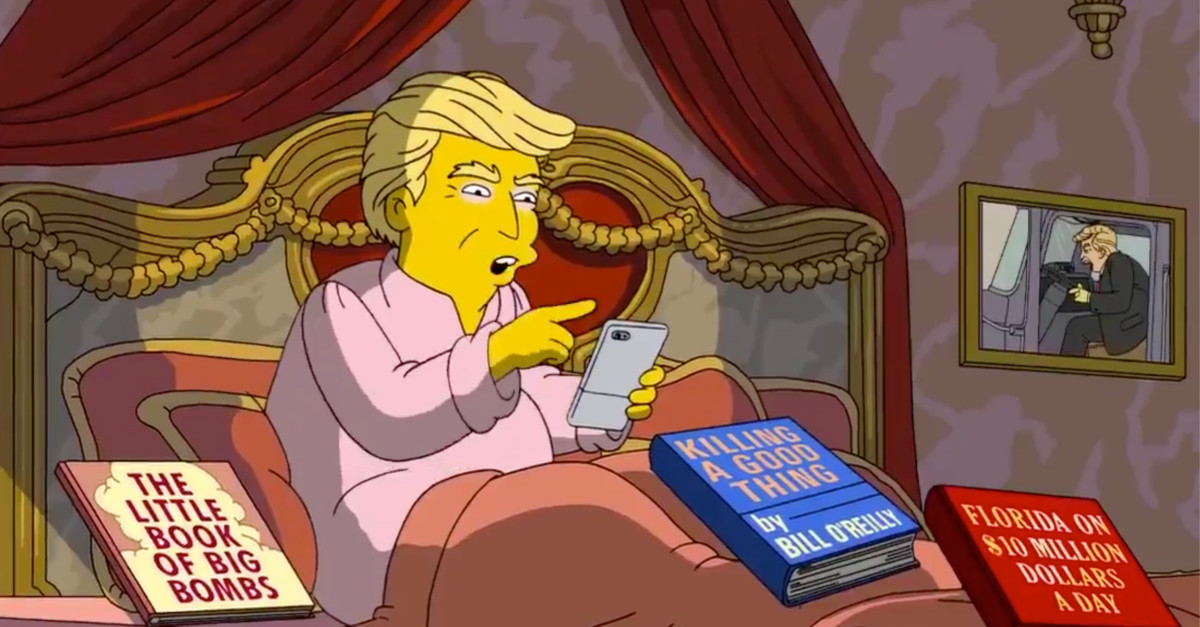 “The Simpsons” will “celebrate” President Trump’s first 100 days with a very special episode this week. Though fans will have to wait until Sunday for the episode to air, a short clip was teased on Twitter in anticipation of what’s sure to be a legendary Simpsons moment.

Trump’s first 100 days in office have been headline-making to say the least. The administration has encountered plenty of hurdles as it attempts to keep promises made on the campaign trail and reports of internal squabbling have played out like a live-action cartoon sitcom. So it’s really only fitting for “The Simpsons” to poke fun at what’s going on over at the White House.

Donald Trump reviews his first 100 days in office. Watch an all-new episode of #TheSimpsons this Sunday at 8/7c on FOX. pic.twitter.com/rDtvNgusFs

RELATED: Having predicted a Trump presidency back in 2000, ?The Simpsons? had only one thing to say about it coming true

The clip opens on a dark and stormy night. As we enter the White House, we encounter the usual suspects: Sean Spicer, Kellyanne Conway, Jared Kushner and Steve Bannon. Spicer morbidly hangs from a rope in the briefing room as Conway runs away shouting, “Not replacing him!” Kushner and Bannon, meanwhile, are strangling each other.

Then we come to the man himself. Trump is sitting upright in his bed “reading” several books with appropriately exaggerated titles such as “The Little Book of Big Bombs” and “Killing a Good Thing.” An aide then brings him a bill designed to lower taxes just for Republicans. The President groans and demands, “Can’t Fox News read it and I’ll watch what they say?”

But the crazy doesn’t stop there! Trump then turns on his TV to witness the swearing in of Supreme Court Justice Ivanka Trump, who is taking Ruth Bader Ginsberg’s seat on the bench.

We then jump to the comfort of Homer and Marge Simpson’s home, who are watching Ruth Bader Ginsberg get dragged out of her seat on TV. “Oh God this is horrible!” Marge exclaims, pulling a bottle of prescription medication from her hair and gobbling up several pills. “This was supposed to last me the whole four years,” Marge says upon realizing that she’s taken the last of her medication.

Homer then suggests he and Marge give the president some time, after all “he’s only 70 years old.”

Tune in Sunday April 30 on FOX for the full episode!

RELATED: ?The Simpsons? revealed Vladimir Putin?s part in the 2016 Election