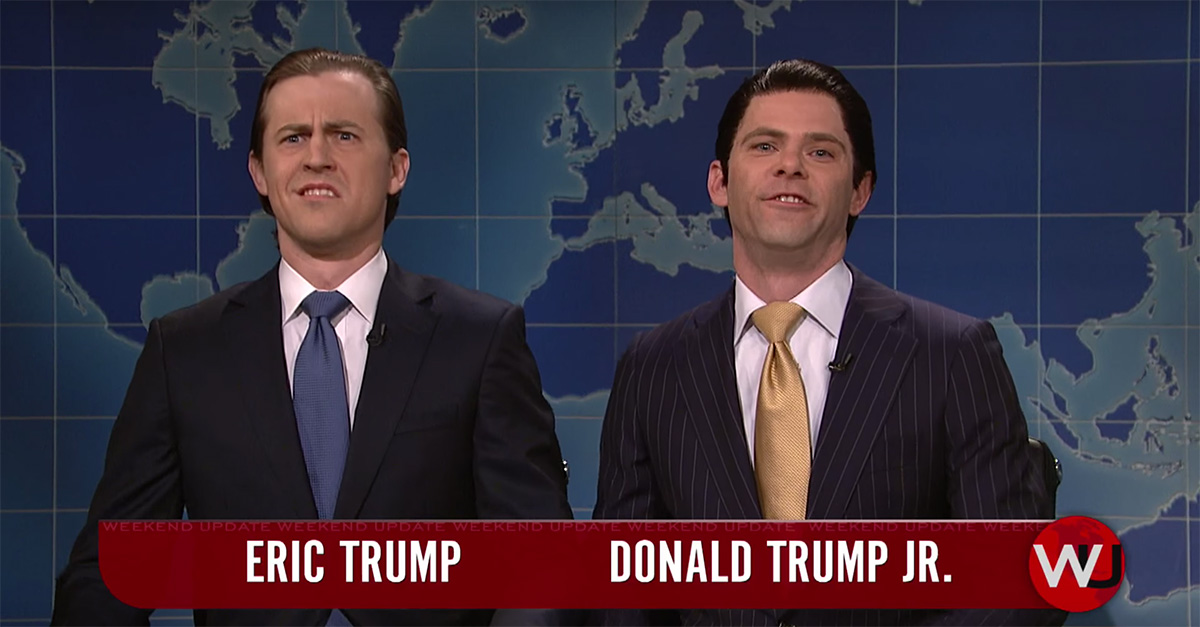 One of the best bits of the post-Donald Trump administration SNL universe has been the consistent appearances of the Trump boys, Eric and Donald Trump Jr., the Beavis and Butthead of the first family. The Trump brothers returned to NBC’s Saturday Night Live’s stage for some new shenanigans in a weekend update.

Mikey Day plays Donald Trump Jr. as the alpha of the two, meaning he can form a complete sentence underneath the early-90s-NBA-coach suit and haircut, while Alex Moffat imbues Eric Trump with Rain Man-esque outbursts, like “I drove the golf car!” or “I got a sunburn!”

For example, Don Jr. begins to tell Colin Jost about when the boys went to cut the ribbon at the newest Trump Tower in Vancouver, explaining just how amazing and “next level” the head chef is. Eric agrees, “I had a funny face pancake! He had whipped cream hair!” Which seems to remind Eric that he’s hungry.

Ever the good brother, Don Jr. takes out a sandwich bag of Cheerios, which Moffat’s Eric proceeds to eat like a grade schooler opening his first box of Lucky Charms. No snack would be complete without a juice box though, as Eric stabs the straw into his juice like he’s trying to murder it, “First of all,” Don Jr. says. “You’re not even using the pointy end.”

It has always been an SNL favorite to parody and troll whoever is currently residing the White House, and President Trump has probably given them more than enough content to mull over. You can’t help but laugh at the fact that they took a topic with the seriousness of President Trump’s ties to his business and completely turned it into a comedic skit for audiences to enjoy. Obviously, government matters are important, but I mean, come on, this is pretty funny.