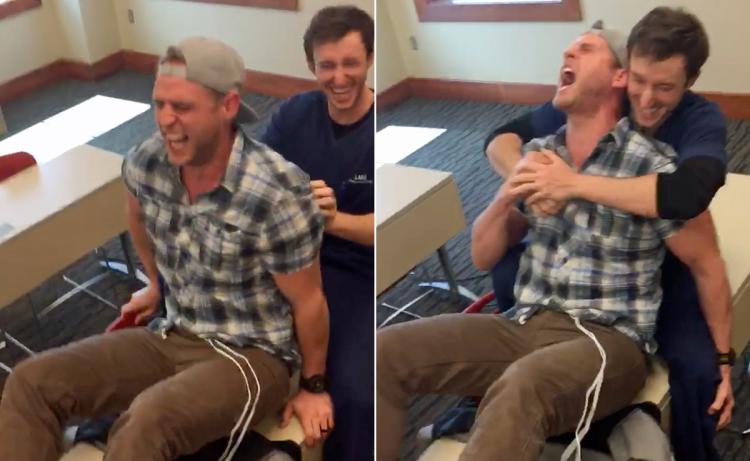 In attempts to understand the pain of childbirth for women, hilarious videos have been circulating recently of men reacting to labor pain stimulation.

One daring student at Lincoln Memorial University in Tennessee named Johnny Wade decided to do just that and volunteered to test out a machine that stimulates labor pain. All bravado in the beginning of the video, he says to the room, “No matter what I say go to [level] ten!”

Almost immediately after uttering those words the stimulation begins, and Wade starts shouting and writhing in pain. The man in scrubs holding him down on a desk tells him to “breathe,” but only a few seconds pass before Wade screams out the safe word, “Pineapple!” The other students in the room struggle to control their laughter as Wade catches his breath.

Although his attempts were valiant, Wade failed to last more than 20 seconds hooked up to the machine. The real kicker is that these electric-stimulations aren’t even as intense or painful as the real deal!

Hopefully, Wade gained some more appreciation for women and what they go through during childbirth.

About the author: Sarah Lowney
Sarah Lowney moved from Boston, Massachusetts to Washington, D.C. in 2012. She graduated from the Catholic University of America with a Bachelor’s degree in Psychology.
View More Articles