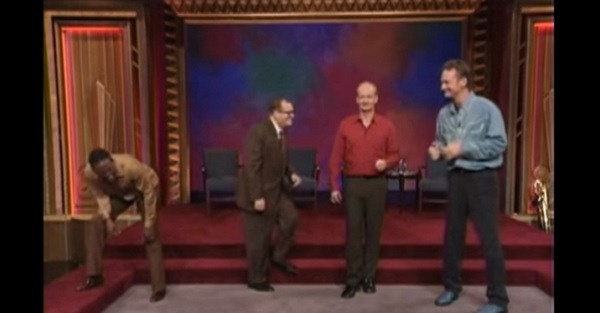 It’s hard to come up with a rhyming song on the spot, and the “Whose Line Is It Anyway?” cast proved that with this blooper here.

The cast was set to do the “Irish Drinking Song” skit, where the crew comes up with a song line-by-line. The difficult part? The guys try to make the second and fourth line of each stanza rhyme, meaning this: if someone misspeaks, it can throw off everyone.

RELATED: That time Richard Simmons showed up on ?Whose Line? and everything fell apart

Case in point? This blooper here, where Drew Carey says something completely unintelligible at the end of his first line. The response? Ryan Stiles tries his best to rhyme with that awkward setup.

Of course, this throws everyone into a fit of laughter, completely derailing the song. Further worsening matters was Colin Mochrie, who decided to throw a casual “Meow!” into the song.

RELATED: When Robin Williams went on ?Whose Line Is It Anyway? he reminded everyone of his comedic genius

Considering the song was supposed to be about “yelling out the wrong name in bed,” you knew it had the potential to be a hilarious disaster. We just didn’t expect that disaster to be centered around “Meow!”