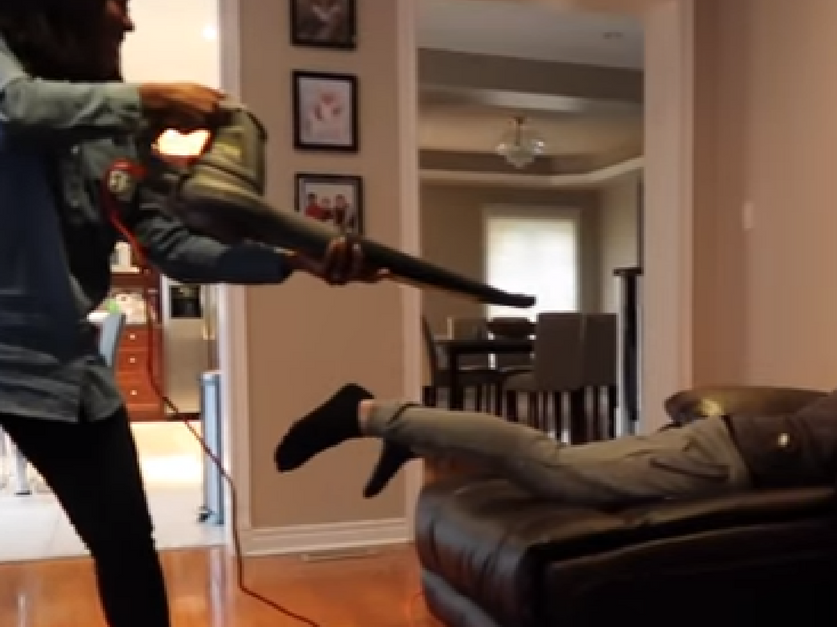 When her boyfriend thought it was safe to take an afternoon nap, this creative and funny mom knew she had the chance to pull a major prank over on him. At least she didn’t use a chainsaw.

While the boyfriend peacefully slept on the coach, she rallied her kids. The three of them tip-toed downstairs and successfully turned the lights on and plugged in an electric leaf blower without waking him up Then, the mom pointed the leaf blower right at her boyfriend and flipped on the switch like she was blowing leaves in the yard.

Her boyfriend’s reaction was as expected: a mixture of shock, grogginess and confusion. The whole thing was priceless. But, he was a good sport about it and didn’t get too mad, even after his girlfriend and kids did a little victory dance at his expense!

More Yard Tools Should Be Used in Pranks

Really, lawn care tools in general are fantastic for pranks. Mowers, trimmers, mulchers, backpack blowers, or pretty much anything else Craftsman, Dewalt, Ryobi makes. Trot out something used to clean up your lawn and just scare the hell out of whomever you please. There aren’t a lot of things people want to have unexpectedly shoved in their face than tools used for yard work. Too many sharp edges and loud noises. Nobody wants a face full of weed whacker.

So yes, please more videos of people being duped and terrified by things from every aisle of Lowes and Home Depot.

This article was originally published May 27, 2017.