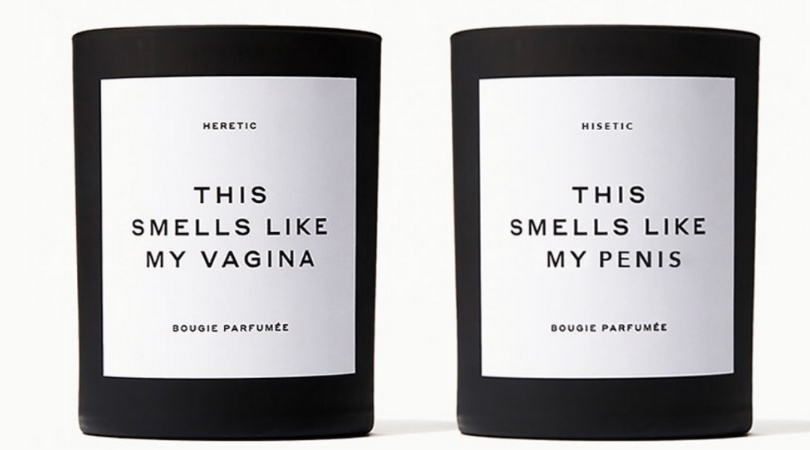 People, did we not learn anything from the vagina scented candle situation? Apparently not because there is now a penis scented candle too, and I have so many questions. Days after Gwyneth Paltrow and her online store Goop announced they were releasing a genitalia themed candle, “This Smells Like my Vagina,” a penis one sprung online. Yes, because they probably knew that it would hit and they could make some serious bank. Boy, oh boy.

Canadian ad agency, Taxi, just unveiled the “This Smells Like My Penis” candle this week, and is nearly identical to the $75 Goop one. But, as expected, it is priced at $100, which is more than what Paltrow is selling it for. The back of the candle reads, “The candle costs 25 percent more than its vagina-smelling equivalent because even though it?s illegal in Canada to pay women less than men, the gender pay gap smells as strong as ever.? Yup, way to highlight that gender pay gap, Canada.

So, does this mean that a penis smells 25 percent better than vaginas, thus you know, justifying that extra percent? Who knows, I doubt it. But, Allegra Weisenfeld, a Taxi agency copywriter, stated “The Smells Like My Penis candle is no different from the Smells Like My Vagina candle, except for no apparent reason it?s worth 25 percent more. With the candle, we want to hammer home the point that [Canadian] women are still paid 75 cents on the dollar for the same work.?

Now, I won’t lie, this to me seems ridiculous but interesting at the time. Yeah sure, I’d give them a whiff, just to see what the whole mess is about, really. But come on, we all have better things to do than create a candle that smells like your private parts.

nobody:
literally no one:
not a single person in the world:
this candle: https://t.co/alPStkbc4X

Unfortunately for us, the Canadian company did not reveal exactly what the penis scented candle smells like and has yet to release the ingredients. But, it is identical to the Goop candle, which is said to smell like citrusy bergamot, geranium, and cedar. So maybe it’s the same scent? If you’re interested and want to get one of these insane candles, they are available for preorder on the company website.

So, putting the whole gross issue aside, I guess I can see why they released a second version of a genital-themed candle. There’s a reason behind their motive, and it’s a pretty strong one. So sure, sell all the penis candles you can. Make a difference, Canada!

Watch: ?Shittens?: The Mittens We Never Asked For But Definitely Want Because Poop Is Gross