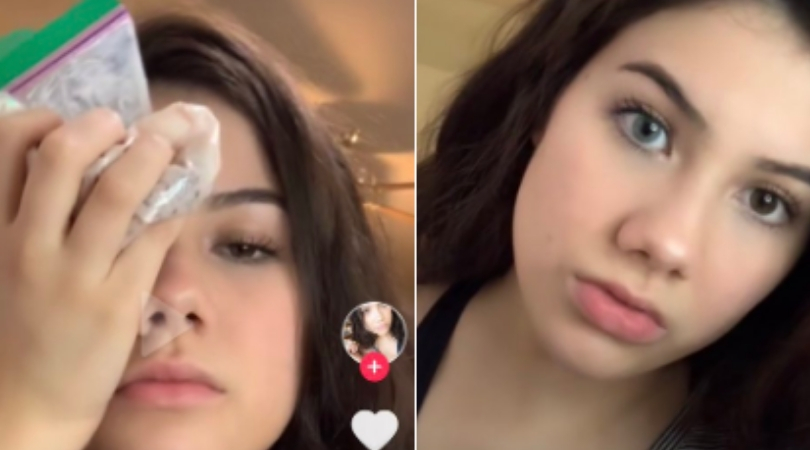 Via iHeartRadio
Via iheartradio

I have seriously lost faith in all teenagers. I don’t understand the length they will go through to get famous. This is the second Tik Tok challenge, that I have personally seen, that doesn’t make sense whatsoever. In case you don’t know what Tik Tok is, it is a social media video app that allows you to create and share short lip singing skits, comedy clips, and share “talent” videos. So basically, you upload a video, and if you get enough likes on this Tik Tok video, you can become “internet-famous.”

Being one of the most popular smart apps around the world, there is an audience of more than 500 million users. With a high teenage user base, Tik Tok videos have managed to influence a lot of teenagers to do stupid challenges that nobody asked for. Just like this one.

What exactly is this challenge? Well, someone came up with a smart idea to grab a plastic Ziploc bag, fill it with hand sanitizer, bleach, and shaving cream. Teenagers are then told to hold the bag against their eye for at least a minute. The trend was started back in April by Greg Lammers, who seems to have sparked the viral phenomenon claiming that this will change the color of your eyes.

Which you and I can both say that it’s definitely not true. Why? Because putting a chlorine-based chemical bag near your eye, such as bleach, can potentially lead to skin and eye damage. Not only that but if you can have permanent eye damage if the bag ruptures. But no, these stupid teenagers think this is real because everything they read online is definitely going to be true according to them. They just choose to ignore the side effects. Vision loss because of bleach? Nah, never.

So naturally, teenagers all over the world decided to try this and there are now more than 30 different videos on the Tiktok app with the hashtag #brighteyechallenge featuring kids trying it. Several people said that putting the bag against their eye hurt, other teenagers said it was a joke, another said that were disappointed as to how many people have followed it. Frankly, so am I.

retweet or I will bleach your eye pic.twitter.com/XCxLheETvu

The challenge then gained even more popularity after user Tiktok user Juliagoolia69 posted a Tik Tok video of her attempting to do the challenge. Why did this Tik tok video of a girl holding a plastic ziploc bag over her eyes viral? Because she has over 90,000 followers!!! In two days, the video managed to gain more than 574,000 likes and was shared more than 35,000 times, with gaining nearly 5,000 comments.

According to Newsweek, she had seen the original video and thought it would be “cool to make one” and used the editing tools on Tik Tok to change the colors of her eyes. So basically, she decided to wear a blue contact lens on the left and a brown on the right. She then put the bag over, took it off, and basically said that the trick had worked.

Which is how everything went wild. So irresponsible, if you ask me. Yeah, sure, this can be silly and all but let’s have a bag explode in your face and then see if you would like to continue on that app. People need to realize that these kids are crazy when it comes to editing skills, dummies. I hate people, this is why the world is going to end by 2025. Smartphones are ruining us.

Watch: Gross Challenge Has People Eating Cereal Out of Each Others? Mouths