Teenager Horrifies the Internet by Cooking Steak in Toaster 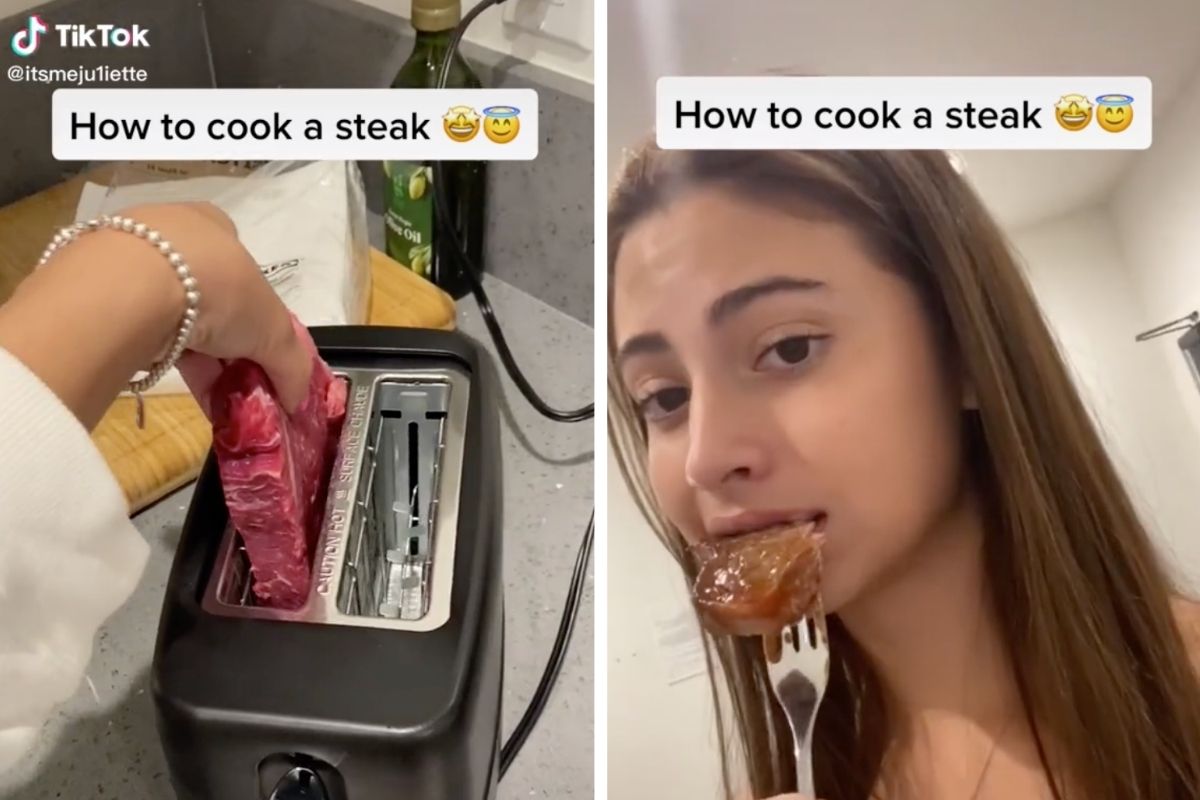 What in God’s name is going on? Are we are at that point in 2020 where we are all basically going mental and losing our marbles? Is this COVID lockdown bringing out the worst in us every single day? That’s the only explanation I have for this. I don’t know who this kid is, or how she was raised, but someone needs to come to get their child, pronto. Basically, a TikTok user has left people on social media horrified with her culinary techniques, (if we can call it that) which includes cooking raw cuts of steak in a toaster. Yes, raw steak just shoved in a toaster. Good lord.

I don’t even know what to say, I’m totally shocked. As someone who doesn’t know how to cook, I would never try this in a million years. Why? Because it’s common sense people, this is so dumb. This is so dumb. The woman, who goes by @itsmeju1iette on the social media platform, shared her short clip with the caption, ?cooking steak for my boyfriend.? Now I have to say, her poor boyfriend must be very oblivious to what her cooking method is because, if I saw my boyfriend doing this for me I would smack him in the head and kick him out of my apartment.

Anyways, since Juliette shared her very bizarre video it has since had over 1.6 million views and 11,000 comments from social media users who said they were either mortified with what she was doing and tagging Gordon Ramsay. Which, I’m sure he’s probably punching a wall right now after watching wishing they get salmonella.

The video shows an American TikToker shoving the two pieces of raw meat into the toaster oven and she leaves them to cook. But she doesn’t reveal how long it took. Honestly, I don’t even want to know. After taking them out, she then slathered all the steak sauce she possibly can all over the meat before eating it. The best part about this video is the starry-eyed emoji and angel smiley emoji. Also, I will say, she didn’t season the steaks, which makes this even worse. I just want to know if they’re both okay? Like, is the boyfriend okay? Does he approve of this method because if he does, then they both deserve jail time.

Meatballs With a Side of Coffee

tag a friend you would make this for 😍 #foryou #cooking

Not surprisingly enough, not only does Juliet cooking steak in the toaster, but she also has made eggs and bacon while using a pair of hair straighteners, fried a cheeseburger on an iron, and put hot dogs in the washing machine. Yes, definitely an unconventional way. Another Tik-Tok video shows how she decided to cook spaghetti and meatballs using a coffee machine, as she added the raw meatballs with some spaghetti pasta to the water inside the jug before then adding a whole jar of sauce in the back. I’m not gonna lie, this young woman horrifies me. We just watched a crime happen.

Nope, this isn’t it folks. If you really want some good recipes I suggest you follow one of my favorite websites, Wide Open Eats, because they can probably show you how to correctly cook your food without fears of dying. Shout out to Lyndsay Burginger. Anyways, I hate social media, I’m not a fan of teenagers, and I am scared of Tik Tok. That is all folks, I’m going to go and throw my phone into the toilet. Bye.

Editors Note: This article was originally published on November 11, 2020.

Watch: Men Are Dipping Their Testicles in Soy Sauce as Part of New Disgusting Trend