People are Showing Their Before and After “Veneer Pictures” on Social Media, and It’s Terrifying 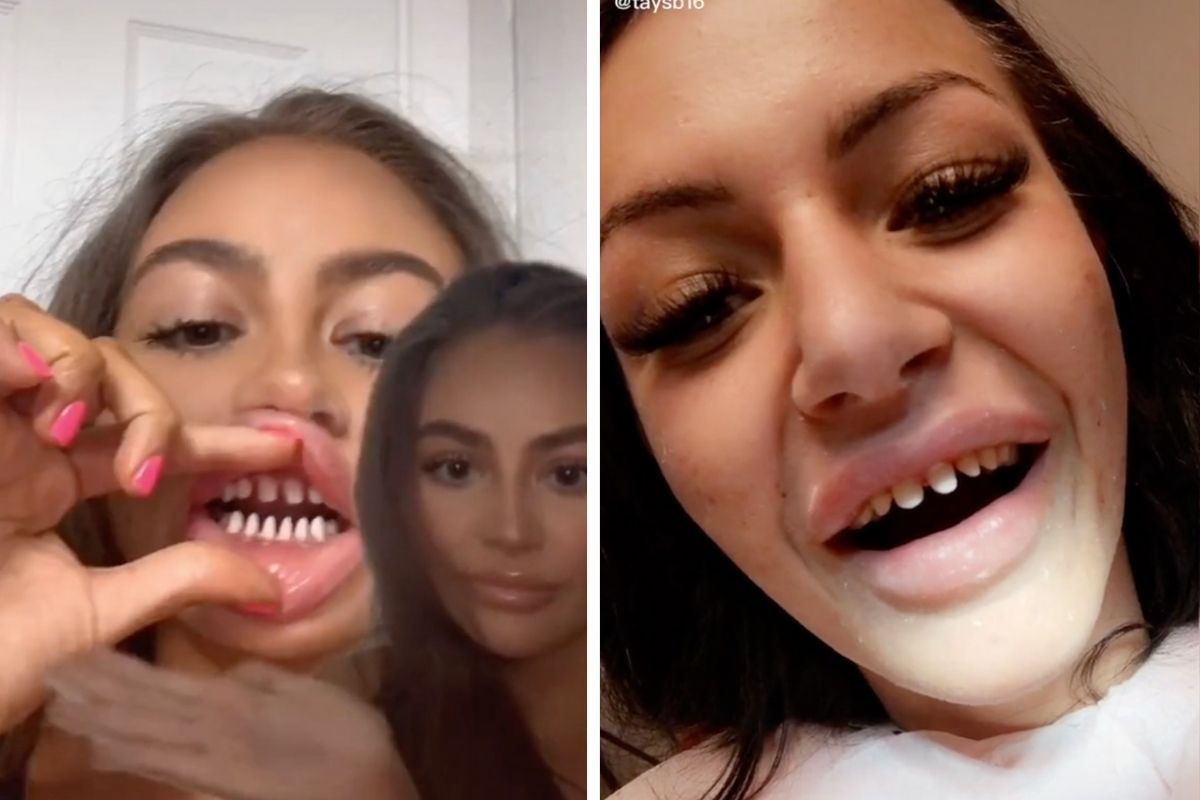 Good Lord, that is it. I have had it with all these teenagers trying to become internet-famous by doing stupid stuff like this. This is terrifying, and just absolutely disgusting to me. I don’t know about you but this stuff freaks me out, anything to do with teeth scares me. So when I saw this, I could not believe my eyes. If you have Tik Tok, I dare you to search the word veneers. Why? Because then you’ll find a lot of videos like the one below, and let me tell you it is horrible.

Basically, there’s this new trend going around Tik Tok where people are showing their teeth filed down in a before picture and then covered with crowns in their after picture, showing off their “new veneers” with the hashtag #veneerscheck. The videos by Tiktok users have been alarming to a lot of dental professionals warning others about the dangers of getting the procedure done. Because let’s face it, this isn’t an easy procedure, and it isn’t a pretty one as you can see. Plus, nobody want’s to see those shark teeth as soon as they open the app.

Dr. Shaadi Manouchehri spoke with Buzzfeed about this nonsense, in which she stated, “I was horrified when I first came across this trend — not only at the state of the teeth but also at how it was portrayed as a badge of honor. I didn’t understand why young people with seemingly healthy and aesthetic teeth were having their teeth shaved down to pegs, and why they were referring to these restorations as veneers. I was also concerned at the number of comments from people saying they were considering having this treatment done.” Manouchehri Is a London-based dentist with postgraduate training in restorative dentistry and Oral & Maxillofacial Surgery.

She explained that the tiktokers had actually just got in crowns on all their teeth, not the veneers like they thought. Crown preparations and veneers do have some similarities but they’re very different restorations. Veneers are used for cosmetic Improvement of the interior teeth or to mask any developmental abnormalities of the teeth that may then affect one’s appearance. Crowns, on the other hand, are used to restore compromised teeth that may already have multiple existing restorations.

According to the doctor, they may also protect posterior teeth that have been treated with a root canal. Manouchehri added, “Veneers will usually only cover the outer surface of the tooth, and they can be as thin as 0.5 millimeters. We can even sometimes do ‘no-prep veneers’ that leave no damage to the underlying tooth whatsoever. A crown will cover the entire surface of the tooth and will often need around two millimeters preparation of the tooth, so is much more destructive than a veneer.”

I won’t go into further detail about why this is so wrong, and why getting crowns is very dangerous, but all I have to say about this is stop trying to become famous by doing stupid stuff like this. Do your research before you post something like this, you’re not an influencer, protect your natural teeth if they are fine. If you want veneers you should be very wary of the procedures in between, especially since they cost an arm and a leg and you don’t need that financial burden. Most importantly, you should learn about the damage that could happen if the procedure isn’t done by a professional, you don’t want to ruin your healthy teeth with all that cosmetic dental treatment. So maybe you should hold off on filing down your teeth with a nail file.

Watch: Teenager Horrifies the Internet by Cooking Steak in Toaster