The Internet is Obsessed With This Woman’s HUGE Mouth 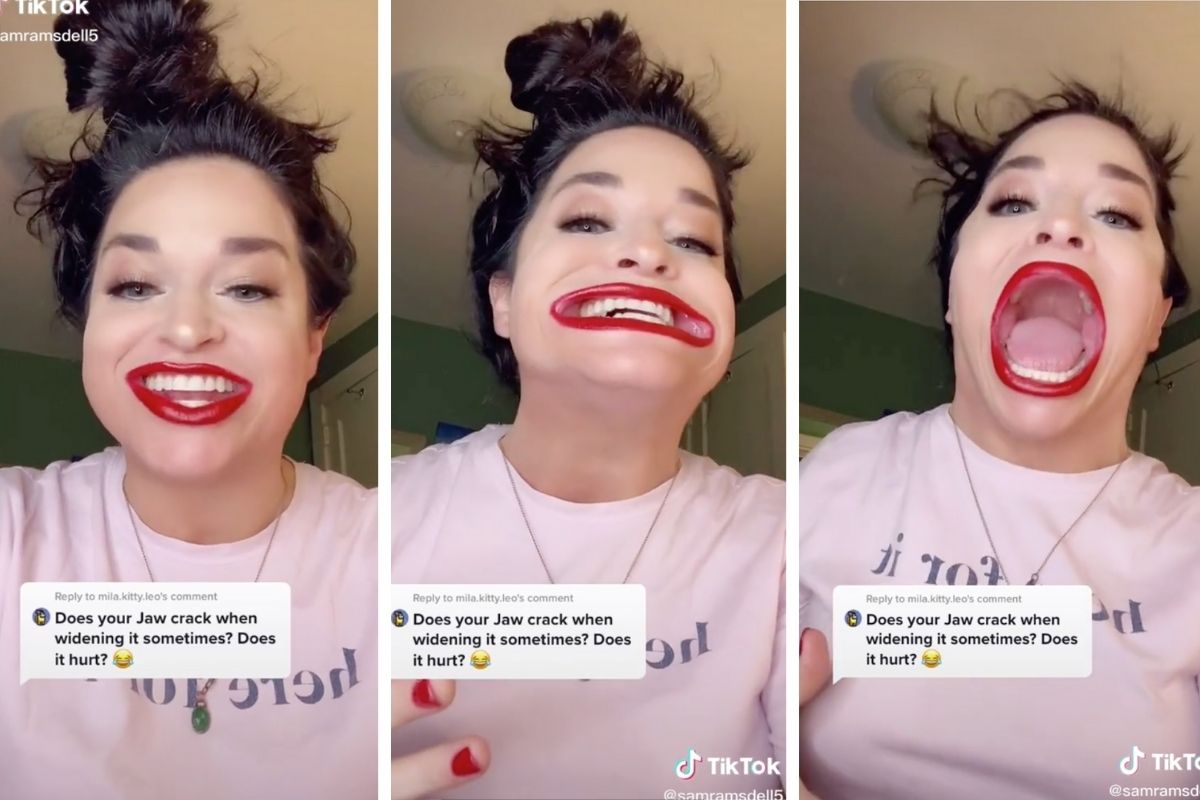 Holy moly, talk about a big mouth. 30-year-old Connecticut resident Samantha Ramsdell has become insanely viral on TikTok, thanks to her huge mouth. No, literally, for her huge mouth. The comedian and singer first posted her video on TikTok, which went insane viral after people questioned about her mouth. According to Ramsdell, who goes by samramsdell5 on the social media app, it started when she was making comedy videos.

She noted, “A lot of my facial expressions I use highlight my huge mouth so I’d always get questions about it. One feature on TikTok lets you make video responses so I’d make funny responses to questions. A lot of people would comment ‘What’s wrong with her mouth?’ or ‘Do you have a condition that makes you have a big mouth?’ So I’d play along.”

Reply to @mila.kitty.leo I promise it doesn’t hurt it’s just my mouth 😂🤪

The TikTok star’s videos, which are now trending on social media, quickly gained her 800 million active monthly TikTok users worldwide, making her a Tiktok sensation and a top creator. So, as more people started to pay attention, she played along and saw it as an opportunity to grow her platform and build an audience. She now answers comments by users on Tiktok with hilarious comedy skits, such as her eating a Subway sandwich in one go followed by a lot of funny face videos. Ramsdell believes her big mouth helps her stand apart from the other hundred of thousand Tik Tokers who have become viral for crazy things. Such as, cooking a steak inside a toaster. Honestly, I prefer to watch this woman instead of that.

Anyways, with maybe one of the biggest mouths in the world, it stands at 3.5 wide and almost a whopping 4 inches tall. To put that in perspective, according to the Guinness World Records, the world’s biggest mouth measures at 17 cm and belongs to Francisco Domingo Joaquim. As far as the haters, the Connecticut woman did note that she gets hateful comments now and then saying that she was first offended by them, but now with more than 787,000 subscribers, that is out of the bag.

The social media influencer did confess that it’s frustrating at times and she would like to be better known for her comedy and singing videos on social media, but let’s face it any press is good press. She did note that having her big mouth makes her a better performer as many other popular artists such as Mick Jagger, Steven Tyler, Alanis Morissette, and Freddie Mercury, who similarly have oversized mouths as well.

Let’s not forget Jim Carrey, who regularly uses his mouth to make some hilarious expressions, especially on the Grinch. My advice for Ramsdell… keep doing what you’re doing if it makes you happy and soon your goals will be achieved. Let’s face it, you have enough followers to really build yourself out here. I’m impressed, let that big mouth shine. I’d love to be TikTok famous. What a great hobby to pick up while we’re in the middle of a lockdown due to the COVID-19 pandemic.

Watch: Women Are Asking Their Boyfriends What The Letters On Tampons Mean, And Their Guesses Are Hilarious