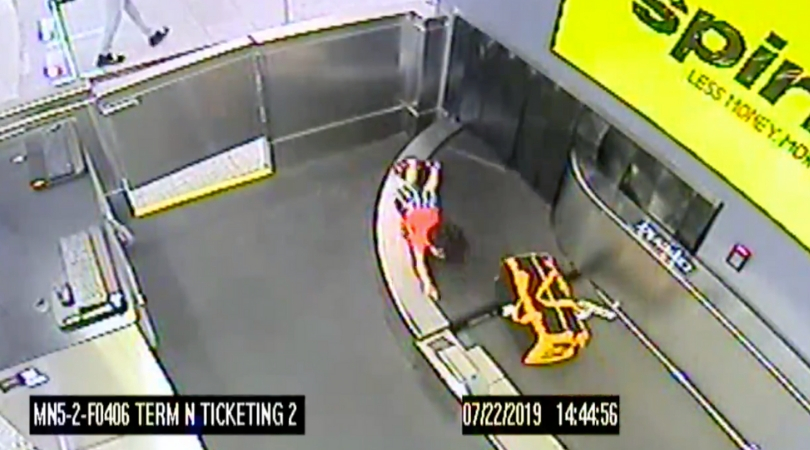 Alright, I am just going to go ahead and say it. The terrible twos are just the worst thing ever! Just look at little Lorenzo going for the ride of his life as he climbs up an airport baggage conveyor belt behind the Spirit Airlines ticket counter in the Hartsfield-Jackson Atlanta International Airport.

The boy’s mother, Edith Vega, was apparently printing boarding passes from a kiosk at the Atlanta airport when she put her son down for a second, but the toddler quickly decided to go on an adventure. The mother apparently saw it happening, as the boy went behind the unstaffed counter and got on the airport conveyor belt.

The 2-year-old was at the end of the line when she noticed that he was going under and was being dragged. The child’s mother tried to jump in and to help him, but the staff didn’t allow her, fearing for her safety. The boy was gone for a total of 5 minutes and was eventually found in the TSA(transportation security administration) luggage room. He was immediately transported to a local hospital and apparently suffered a few cuts to his arm and fractured his right hand. Atlanta police are also investigating the case since you know, this could have gone way worse than it actually was. Honestly, this kid is incredibly lucky.

The best part about this whole deal is that the incident was all caught on security footage where the surveillance video shows the small child physically reaching over for a suitcase on the bag belt, which then pushed him through the other side. That’s when the wild ride on the luggage conveyor belt begins for this poor kid and down the baggage screening system to the back baggage area he went.

Ah, told you, terrible twos. Honestly, I have always wanted to see where these bags end up, so I need to thank this kid for showing us where all our luggage go. It’s pretty impressive, really. Also, I love how all the airport officials are just so nonchalant waiting for him to fall down from the belt. You’re my hero, Lorenzo.

Editor’s note: This article was originally published on August 19, 2019.

Watch: Passenger Films Wheel Rip Off of Plane During Take Off