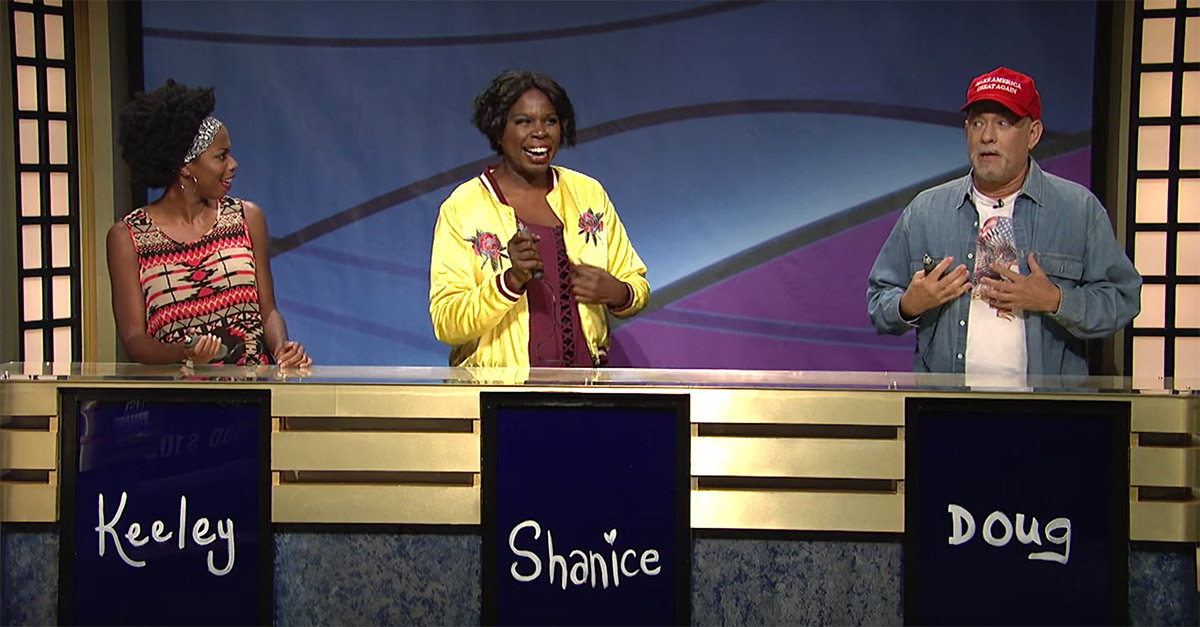 NBC’s Saturday Night Live will always be known for breaking barriers and pushing boundaries by using sensitive and controversial topics for their sketches. The show has a history of taking what generally rides the borders of inappropriate and turning them into light-hearted comic relief. It’s a nice reminder to take a step back from the chaos sometimes and to remember the bigger picture of enjoying life.

SNL has performed a skit series called “Black Jeopardy” over the years, and this specific one with Tom Hanks is a great example of turning triggering things into light-hearted comic relief. The Forrest Gump star plays a confused middle-aged white contestant with a “Make America Great Again” hat on named Doug, but maybe this skit showed that the “git-r-done” crowd has a little more in common with the black community than they think.

Kenan Thompson plays “Black Jeopardy” host Darnell Hayes, starting the skit with questioning if Doug is ready to play “Black” Jeopardy. Doug answers plainly, explaining that he just wants to win some money and so hopefully that’s what he’s going to do. And he clearly holds his own, shocking Darnell with answers he wasn’t expecting from a Trump supporter.

The questions and categories are always on point: the “You Better” category, for example, has the answer “You better take your ass to the kitchen and look in the packet drawer” to the first question, “Where you can find duck sauce, hot sauce and safety pins?” But when the question “They out here saying the new iPhone wants your thumbprint ‘for your protection,’” under the “They Out Here Saying” category comes up, and Doug is the one to answer correctly by claiming it’s a government conspiracy, Darnell is pleasantly surprised.

And when another question prompted “They out here saying every vote counts,” Doug again answers correctly, saying they already decided who was going to win before the election started. Finally, Doug follows up with an answer about the Madea movies, saying if he can laugh and pray in 90 minutes, that’s money well spent.

Unfortunately, the end of the sketch turns the previous few minutes on its head in a sadly hilarious way, bringing the audience back to reality. Nevertheless, the whole skit is a great showcase of what SNL does best.

Editor’s note: This article was originally published on October 23, 2016.