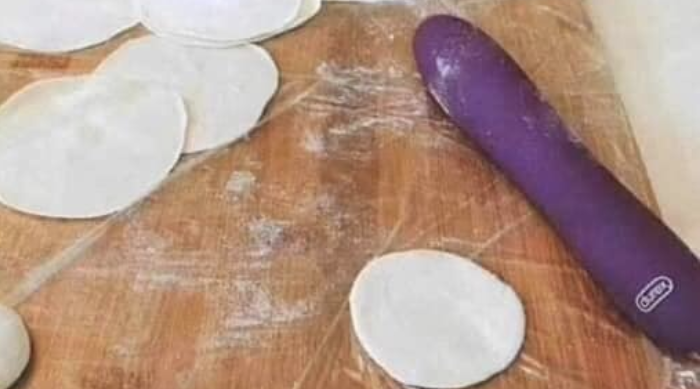 The woman, named Peggy, began selling her produce on Facebook Marketplace. To help illustrate that her tortillas were authentic and scratch-made — and thus worth purchasing — Peggy included a picture of some freshly rolled dough in her post, with the rolling pin she used included in the shot.

And people pretty much immediately called out that Peggy was using an expert-sized sex toy to roll out her tortillas.

Whether in knowing denial or out of a genuine belief that she was using a real rolling pin, Peggy insisted to her disgusted and troubled potential customers that, no, this was indeed just a fun, purple rolling pin.

A rolling pin that also vibrated, she claimed.

1. It’s fitting that this woman’s name is Peggy and that she’s from Texas because this feels like the plot of a King of the Hill episode. All she needs now is a husband named Hank to scream, “BWWAHHHH” when he finds out what his wife has been rolling her delicious tortillas with.

3. Unless she bought it used at a garage sale or something and the person she obliviously bought it from was like, “What? A purple vibrating… rolling pin? Uh yeah sure. Five bucks.” Oh God… that’s what happened isn’t it. DO NOT EAT THESE TORTILLAS.

This story was originally published January 16, 2020