President Trump Posts Image of Himself as Rocky 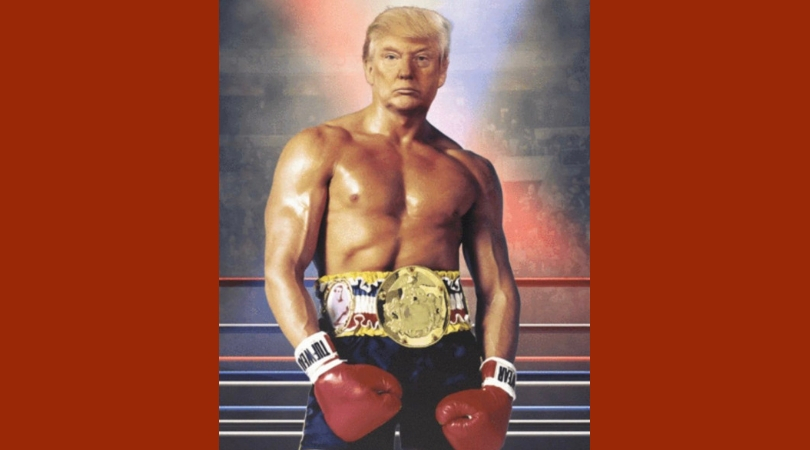 Uh, it looks like Trump is trying to declare that he is a heavyweight champion when it comes to politics? Either that or he is trying to live out his dreams of becoming Rocky. Turns out the President of the United States tweeted out a picture of actor Sylvester Stallone as Rocky Balboa but decided to photoshop his face on it.

Our guess is that someone from a group chat probably sent it to him and he loved it so much that he just decided to post it on Twitter without explanation thinking it was a good idea. That’s just our guess, though. But still, now there is a photo on social media showing our 6-foot-2, 243-pound “shirtless President” looking straight ahead ready for combat, over an image of Stallone’s toned ripped 5-foot-10, 176-pound body. Gloves on his fist and a championship belt around his waist and everything.

The Tweet didn’t include any context, nor has the White House commented on the situation. But it came right after polling showed voters souring in impeachment and as the House Democrats are preparing themselves for another round of impeachment hearings.

Just this Tuesday, Donald Trump denounced Democrats’ inquiry to a heavily packed rally that took place in Florida. Trump noted that “first it was the Russia hoax, and now the same maniacs are pushing the deranged impeachment narrative.” Yikes.

It’s no secret that for the past few months, Trump has been fighting accusations left and right, saying that he sought to influence the 2020 election by pressing Ukraine to investigate Joe Biden, who was the former Vice President. Republicans, along with President Donald Trump, have denied all accusations and keep portraying Trump as the victim of a partisan attempt to overturn the previous election that took place in 2016.

Can someone please go interview Sylvester Stallone and see what he thinks about this? I will say this, whoever photoshopped this did a hell of a job.