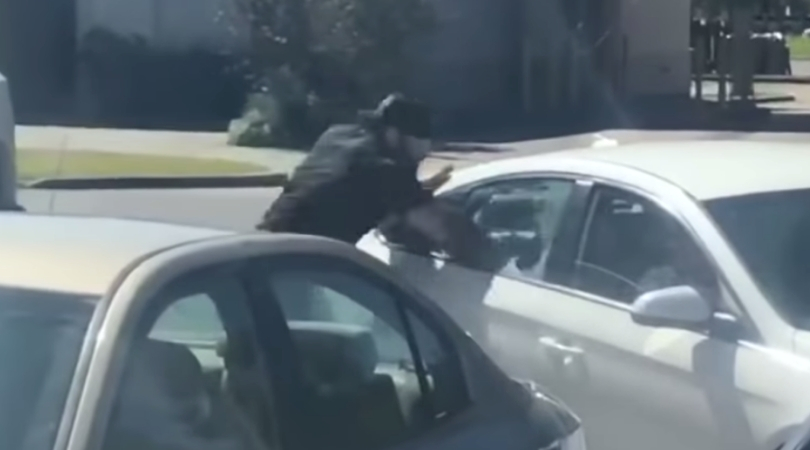 They say you get what you deserve. All the bad things you do or say will eventually come back and bite you in the butt. This young punk got exactly what he deserved, alright. A young dummy learned his lesson in a matter of seconds, after foolishly and stupidly threatening an Army Veteran’s wife. Yes, this kid must have been so high to do something so idiotic.

After video of the incident came out, the veteran felt the need to describe his actions by posting his version of the story online. The veteran stated he was enjoying a morning with his wife and went to get some coffee. Out of nowhere, the group of guys started harassing them. The man said that he didn’t mind them saying a few insults here and there since they were teenagers. But, what the Vet did not have, was them insulting his wife, saying they were going to kill and rape her.

So yeah, these kids saw it coming, and fast. Obviously taking it one step too far, the veteran got out of his truck and literally punched the youngster right through the window of another car. This man didn’t even care about his hand, he was just protecting his woman and punched the heck out of that car window. Which I will applaud him for.

Of course, the video quickly went viral, because honestly, have you ever seen anything like this? The strength this dude must have left me shocked! The veteran, later identified as J. Guidry, released the following statement.

I am writing because I am a big guy in this video. I can 100% attest to the events that happened and that the words written before the video are accurate. I am a husband, father, son, friend, veteran, football player and finally a human being. I have never claimed to be a badass or thug or killer, I, however, have been trained all my life to be protective of what is mine. The young men that threatened my wife were serious in their threats and had a pistol on the front seat. From my experience, an overwhelming show of force is the only way to take the wind out of a bully’s sails. I would rather be shot protecting my family and friends and country than cower behind something or hold my tongue. With that said my wife is trained as well and had my six covered and those who know will understand that statement. I am not a bully I’m protective husband. I did have a little scratch from this to answer everyone’s statement and no I didn’t break my wrist lol. All I can say is if you are going to be a bully or a threat make sure you’re prepared to defend your actions. To all the young men and woman out there that haven’t been raised to respect others please learn quickly because not everyone you disrespect will sit quietly.

God bless America and all of y’all

I’m with Mr. Guidry, here. These punks were being just that, punks. Don’t mess with someone that’s triple your size, dude. You should know better than that. Thank God there was a window in between both of them because that kid would have been dead! Gone! Finished! Game over and cue the Mortal Kombat song.

Watch: This is What Happens When You Hit a Woman in Front of Her Son. He Knocks You Out.