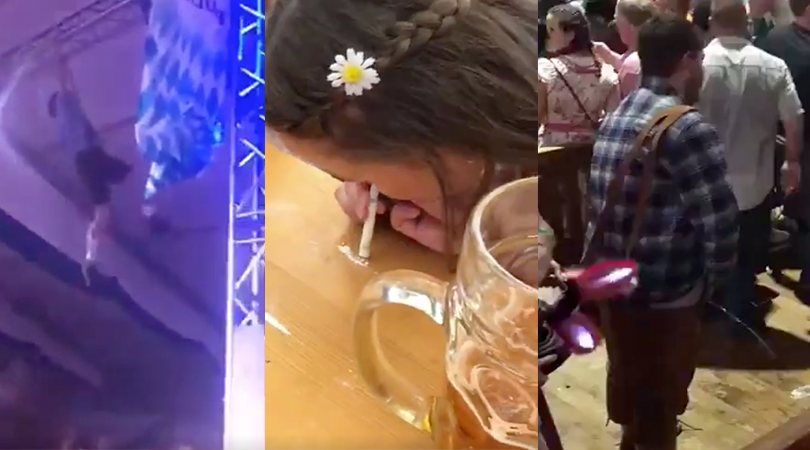 Oktoberfest in Munich, Germany probably began in 1810 as a celebration of the Bavarian king’s marriage to the popular Princess Therese of Saxe-Hildburghausen. But all Oktoberfest really means now is a reason for common hooligans, like you and me, to imbibe beer, sausage, and pretzels until we’re about to burst. Ultimately though, the festival is all about beer. And so it shouldn’t surprise anyone that the historic festival invariably brings in a ton of drunk people  every year. You might be thinking, “Yeah. There’s beer. People are drunk. Figured as much.” But these Oktoberfest videos are so much more. It’s the difference between having fireworks described to you and watching a fireworks factory explode. Seriously, have a look.

During these pandemic times, it can sometimes hlp to live vicariously. Thankfully, Twitter user @MoristeEnMadrid collected video highlights of Oktoberfest 2019 so that we can all see for ourselves what a magically depraved time the German festival is — and hopefully will be again, once we’re all vaccinated.

First up is this highlight of German 20-somethings blasting rails of cocaine about as casually as possible, while sitting at their table, which is completely out in the open, as a server brings them beer. Somehow this is the tamest video.

Next we have this adventurous guy, who’s dead now.

Then there’s this. It just sort of happens.

And then this highlight, which really captures what the real theme of what Oktoberfest is now: random, drunken, wonton chaos combined with public urination.

Finally we have the Spirit of Oktoberfest gracing the festival with his presence, like Father Christmas riding his sleigh down the main street of a snowy town on Christmas Eve. But with his dick out, because beer.

Editor’s Note: This article was originally published on October 15, 2019.

Watch: 10 of the Best Places to Celebrate Oktoberfest in Texas