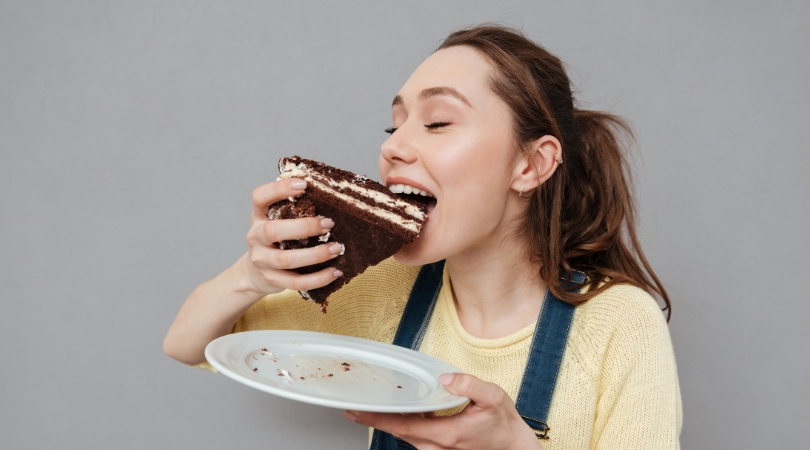 Okay, okay, I admit it. I am that person who eats the grapes straight out of the bag while shopping at the grocery store. Can you blame me? I get hungry, and instead of being tempted to buy the whole store, I’ll just eat a few grapes here and there. But this lady, this lady got SO hungry while shopping at Walmart, that she decided to skip the grapes and go for a WHOLE cake before even making it to the register.

Oh, and apparently she didn’t want to pay full price for it either because she ate half of the cake so it “wasn’t fair.” Which is hilarious and so dumb at the same time. If that were the case, I would eat half of the groceries in my cart and only pay for half of them too, lady. But that’s not how it works, sorry to burst your bubble.

Y’all. A Texas Walmart banned a woman who ate half a cake in the store and demanded half off the price when she got to the register.

I can’t stop laughing. And I want chocolate cake for dinner now. https://t.co/ACdQx0zOQi

Basically, this woman decided to go to a Walmart and grab a cake from the bakery and walk around the whole store calmly eating it. When she arrived at the register, cops were called because well, I’m pretty sure this woman was yelling that she just wanted to pay for what was left of the cake.

So, when Wichita Falls police arrived, she was forced to pay for the whole cake and was ultimately banned from the store after attempting to get an unfair discount. Walmart was not having it one bit.

Not surprising at all, that this isn’t the only “food-related” incident that occurs in a Walmart. Back January, another woman from Wichita Falls was banned from the store after she drank wine from a Pringles can and spent several hours riding around in an electric scooter outside in the parking lot. Talk about a good time, huh?

What’s in your water, Wichita Falls?