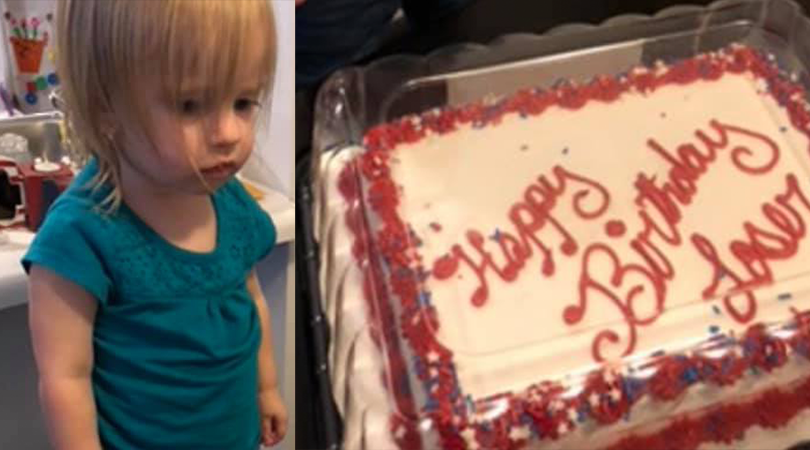 Don’t worry. Walmart bakery workers weren’t bullying a toddler. No one was sitting back there with a piping bag, spotted little Liz Jones as her mom was placing an order, and thought, “Yo that baby sucks. I gotta let ’em know.” It was all, it would seem, a Starbucks barista-esque writing the wrong name on the coffee cup type of mixup.

You see, Liz’s parents call her Lizard. So when Melin and Dan Jones of Bonne Terre, Missouri were throwing a little family party for her birthday they ordered her a cake that said, “Happy Birthday Lizard.” Someone on the other end of that order at Walmart misheard “Lizard” as “Loser” and apparently didn’t bother to double-check.

It’s not surprising no one at Walmart thought to double-check whether or not Liz’s mom wanted “Loser” written on the cake. Everyone uses negative monikers as terms of endearment so often these days that “Loser” is as fitting on a celebratory cake as “Congratulations.” If I worked in a bakery and got an order for a cake that was supposed to say, “Nice Job You Worthless Piece of Crap” with a turd emoji dotting the “i” in piece I wouldn’t bat an eye. That’s just how people talk to each other.

And don’t worry, the little Lizard was not upset at her birthday cake typo. She can’t read. She’s a 2-year-old. All she was seeing were some squiggles. The parents, of course, had a good laugh about it as well. They aren’t mad at Walmart. If anything they should thank Walmart. What was going to be just your average second birthday celebration is now a lifelong family story and a viral moment of fame. One of the few viral moments of fame that doesn’t end in death threats or calls to have you fired and your family made homeless for, like, saying you don’t get why everyone is mad at Scarlett Johansson or something.

Watch: Which Birthday Cake Recipe Pairs with Your Birth Month?