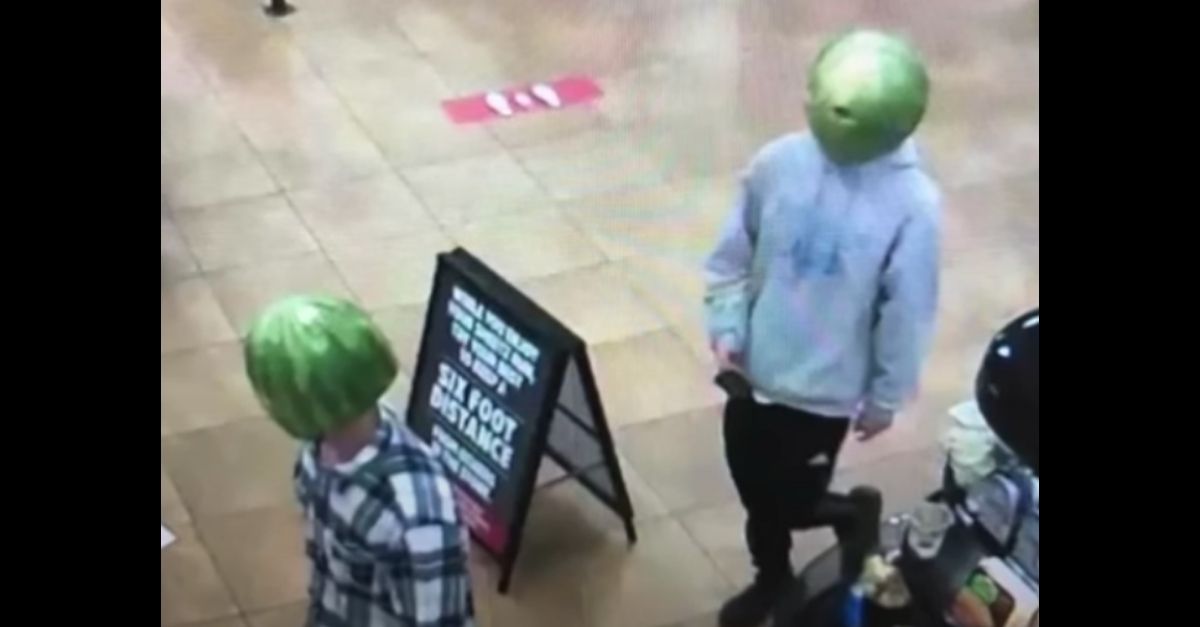 In Louisa, Virginia, a town west of Richmond, police have arrested a pair of “melon-heads” in the case of a convenience store robbery. And when I say “melon-heads,” I mean it literally.

People have gotten awfully creative with what they use for face masks because of the coronavirus, and I guess this couldn’t have been a more appropriate time to get creative with choosing a face-covering to go rob a convenience store. And these two robbers were definitely thinking outside of the box, maybe a little too hard.

Louisa Police Department was searching for two shoplifters who had robbed a local Sheetz convenience store. I don’t think anyone was expecting what they saw when the police department had posted pictures of the perps on their Facebook page. The Facebook post (now removed because of the overwhelming responses and police no longer needed information) was calling for help in identifying the two shoplifters who had covered their faces using watermelons. Yes, fully grown, ripe watermelons.

These two people had completely carved out watermelons to put over their heads, even cutting out eye holes to see. Then, they drove a black Toyota Tacoma pickup truck to go rob the Virginia convenience store. The watermelon heads were eventually identified, and one suspect was arrested and charged. 20-year-old Justin M. Rogers was charged with committing larceny, underage possession of alcohol, and petit larceny of alcohol. Police have identified the second suspect, but have not released more information on that part of the case.

Louisa Police Chief Tom Leary commented on the hilarious situation, saying, “I’m in my 46th year of law enforcement. I’ve seen a lot of strange things, this certainly ranks up there with some of the more unusual events for sure.” Well Chief Leary, you can imagine how strange that looks to a commoner like me.

And just a fair warning, if you ever feel so inclined for any reason to use a watermelon as a face mask against COVID-19, I highly suggest you stay away from that path. You might enter a life of crime.