Menu
Follow us
Search
Menu
Search
NEW YORK, NY - MAY 18: Actor Seth Rogen participates in SiriusXM's 'Town Hall' with the cast of 'Neighbors 2' at SiriusXM Studios on May 18, 2016 in New York, New York. (Photo by Cindy Ord/Getty Images for SiriusXM)

While the president is notoriously selective about whom he follows on Twitter, his son Donald Jr. is less discerning, and Seth Rogen used a DM to get The Truth about Donald Trump and Russia. The site offers “open DMs” that let you receive private messages from anyone (Editor’s note: don’t do this). Most people — especially celebrities — have it turned off.

Hey man. I don’t want to come across as a weirdo or anything. I’ve just realized I could message you so I thought I would. So, maybe, ask your dad to investigate if his campaign was in talks with Russia leading up to the election? Or maybe just ask your dad to go back to hosting game shows? I bet he would prefer that. He doesn’t seem to like this. Thanks dude! Peace!! 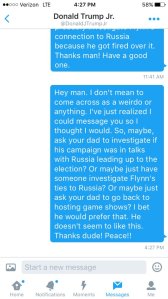 Rogen has yet to reveal whether Donald Trump Jr. gave him The Truth about his father’s relationship with Russia. Perhaps he’ll try Eric next.