Couple Toast Their Marriage With Mr and Mrs Bongs 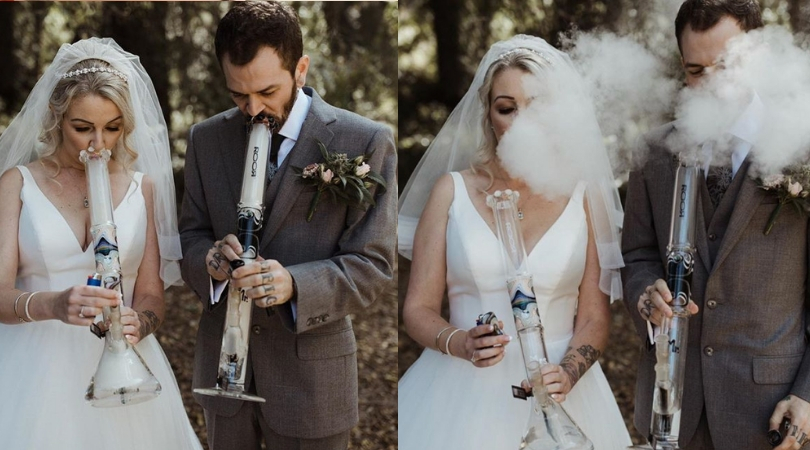 Forget the champagne toasts, it’s all about the weed toasts! A couple, who are more than 4/20 fanatics, decided to toast their wedding vows by having their ‘first toke’ as husband and wife. The couple even decided to have special matching Mr and Mrs bongs made for their special day. You know, the normal thing.

Coral Reefer and husband Mio decided to “combine their love” of cannabis and of course each other by customizing personalized bongs for their wedding. Because well, if you ever want a unique wedding, bong hits is the way to do it, right?

Wedding photographer, Rachel Artime, said the couple’s passion for weed is what made their wedding pics one of the most “unconventional” photoshoots she had done. Which I mean, duh. She also noted that she received a heavy amount of positive feedback from social media.

To have & to toke! 👰🏼🤵🏻 @coralsglass and I get stoney together everyday, but i wanted a way to make it extra special for our wedding day. I reached out to @roor.germany & @mahglass to have these custom Mr. & Mrs. Bongs created for us to celebrate with! 👰🏼🤵🏻💨 #firsttoke #weddingday #justmarried #mrandmrs #roor #cannabis #bonghits 📸 @rachelartimephoto

In case you were wondering, yes, weed is indeed legal in California, so they weren’t technically breaking the law. They were just breaking their relative’s hearts, those who don’t agree with it at least. Artime was able to capture unique pictures of the bride in her wedding dress and veil with her groom by her side. They were both pictured simultaneously puffing on their bongs.

Some photos do look pretty cool, but others, well, you can’t even see the bride from how much smoke there was around her. The couple literally blew huge clouds of white smoke that flew around them making it seem like there was a fire. Cool, but definitely the most unusual wedding photos you’ll ever see.

That’s not all. According to the 24-year-photographer, the couple also had similar engagement photos featuring them smoking blunts! Cora’s wedding bouquet even included hemp in there ou know, just in case. But, the photographer didn’t mind them smoking at all, because she said that hot pictures made it look “haunting and romantic in a weird way.”

Like I said, to each their own right? To have and to…toke? Congrats to the smoky couple!

Editors Note: This article was originally published on November 8, 2019.