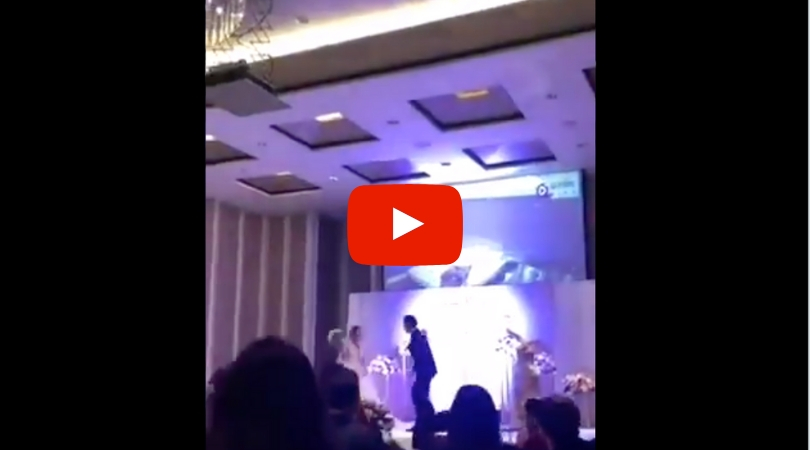 Yikes! There’s certainly nothing quite like framing your new wife for cheating on you when you have just agreed to live happily ever after and spend the rest of your lives together. Well, that is exactly what happened to this unfortunate couple. A hilarious and devastating video is now going viral on social media, showing the groom framing his new wife for cheating on him.

But, not only did this terrible human cheat on her new hubby, oh no. She decided to cheat on him with her brother-in-law. The video shows the bride and groom standing on a stage in front of a big screen, which makes it look like they are at their wedding reception. The DJ is then heard speaking in Chinese, as the wedding guests cheer for the couple.

The DJ then stated that the video clip they are going to see was a video of how the bride and groom grew up. Little did the guest know that instead of seeing a cute video with childhood pictures, the crowd was surprised with the video of the cheating bride having sex with her sister’s husband.

THE DRAMA. THE HURT. THE BETRAYAL. I FEEL IT ALL.

Safe to say this cheating duo is doomed for life and they are both shunned from the family for good. The groom immediately turns to the bride and says, “Did you really think I didn’t know?” The bride then quickly tried to pinpoint it at him and throws her bouquet at her new husband. The newlyweds are then separated by their wedding party before they both physically start to fight it out on stage.

Now, I don’t know the backstory of this couple, but dang. You must really not be in love for you to sleep with your sister’s husband. If I was your sister, I would have run up those stairs and dragged you by the hair. Okay kidding, maybe I’m exaggerating a little bit, but this is intense. Gross too.

In an effort to “heal” the relationship, the bride’s brother-in-law and her sister’s husband stepped in to try to mediate the couple while they sorted things out. Eventually, the cheating bride admitted to having feelings for her brother-in-law and to the cheating situation. Because well, there is a video so she can’t lie about it anyways.

For all that just cancel the whole wedding 😭https://t.co/GlBFsZY3uP

How did the groom get a hand of the video showing his bride’s affair? Well, turns out the cheating duo had sex in the couple’s newly constructed home and they were caught by their security camera. Rule number one of cheating, always make sure no one is watching. They tried, they failed, and now they are both single forever.

But according to Reddit, there might be more to the story than the video actually shows. Several influential Chinese bloggers have claimed that the bride started the affair after the groom became physically abusive with her. Her brother-in-law then tried to stop the domestic violence, and she developed feelings for him. Several gossip columnists also claim that this is all fake and a marketing stunt since the footage had a video app logo on it.

Still, whatever it was, it was entertaining to watch. You gotta love your gossip, am I right? Think of this as a lesson, don’t cheat on your soon to be hubby, or you’ll end up online. Also, I can?t believe he went ahead and spend so much money to continue with the wedding.

Just cancel it, bro, save that money!

This article was originally published on January 2, 2020.