Trust is important in a marriage. A marriage without trust is really just a prolonged hostage situation. A person should be able to assume their partner is capable of traveling somewhere, even somewhere they intend to get a little crazy, without worrying about being cheated on or whatever. If that thought even crosses your mind regularly then there’s probably something wrong with the relationship (or you).

While it is a little bit reasonable to worry about what kind of shenanigans a guy might get into on a bachelor party, it’s outrageously unreasonable to attempt to make a hard set of rules (beyond “do not do anything sexual with anyone else”, which goes without saying). It is straight up insane, meanwhile, to try to make a set of rules for your husband and all the other guys on said bachelor party. But that’s what one lunatic decided to try and do. And she polled her Facebook friends on which rules to institute. 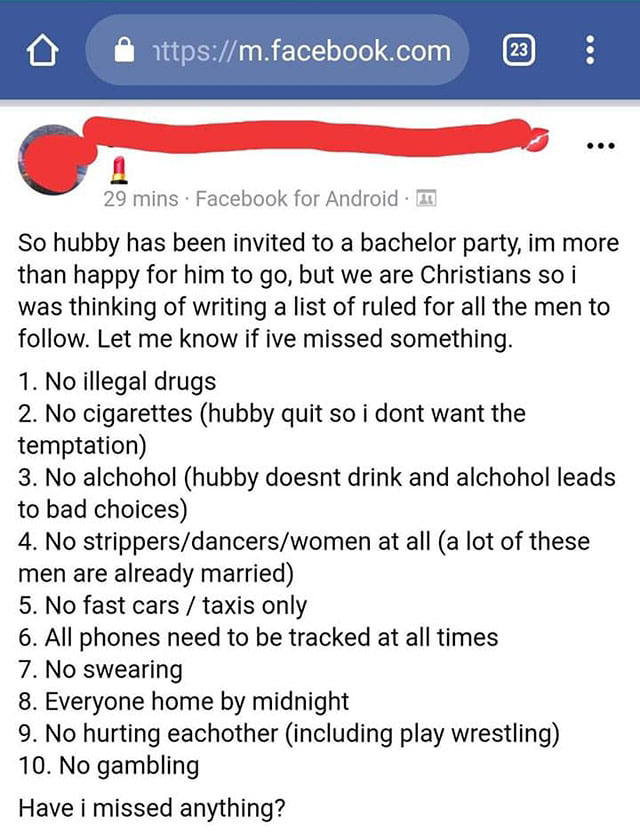 Let’s break down these rules, shall we?

1. No illegal drugs.
This is, admittedly, moderately reasonable. For one, she says no “illegal” drugs. It’s not that crazy to be like, “Hey, Tim, please don’t blast lines of cocaine all weekend.”

But, remember, she wants to impose these rules on every single man at the bachelor party. Not just her husband. So, really, this is still insane. Especially if they’re in a state where marijuana is illegal.

2. No cigarettes.
This shouldn’t be a hard rule. It should be an “I’ll be disappointed/annoyed if you do this” sort of thing.

3. No alcohol.
Now we’re in objectively crazy territory. (Remember, she wants these rules for every single guy at the party.) What the hell are these guys supposed to do? Eat burgers and go to movies all weekend? Good God.

Even for her husband, this rule is nuts. Okay, he “doesn’t drink.” So? Unless he’s a recovering alcoholic he’s adult enough to handle a tiny bit of booze. Let the guy have a beer for a toast, at least.

4. No strippers/dancers/women at all.
Does this include waitresses? “I’m sorry ma’am, we need to be sat at a table with a waiter. I shouldn’t even be talking to you right now. Now please get away from me before my wife finds out and locks me in the garage when I get home.”

5. No fast cars/taxis only.
Based on who your husband married (you) this sounds like a Toyota Corolla crowd. I think you’ll be okay.

6. All phones need to be tracked at all times.
May I humbly recommend, sir, faking your death on this bachelor party and starting a new, better life?

8. Everyone home by midnight.
“Also, leave all your testicles with me.”

9. No hurting each other (including play wrestling).
I want to spend hours interviewing this woman. I need to see life through her eyes.

10. No gambling.
What’s he supposed to gamble with? It feels like he’s already lost everything.

Eventually, the woman’s Facebook friends convinced her that these rules were nuts, so she came up with a better solution. 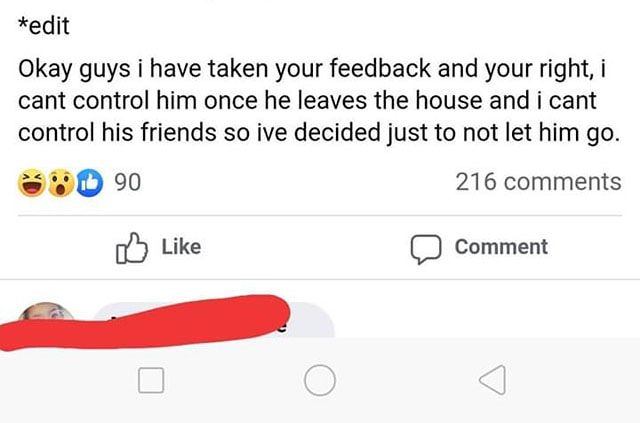 Dude. For real. Fake your death.