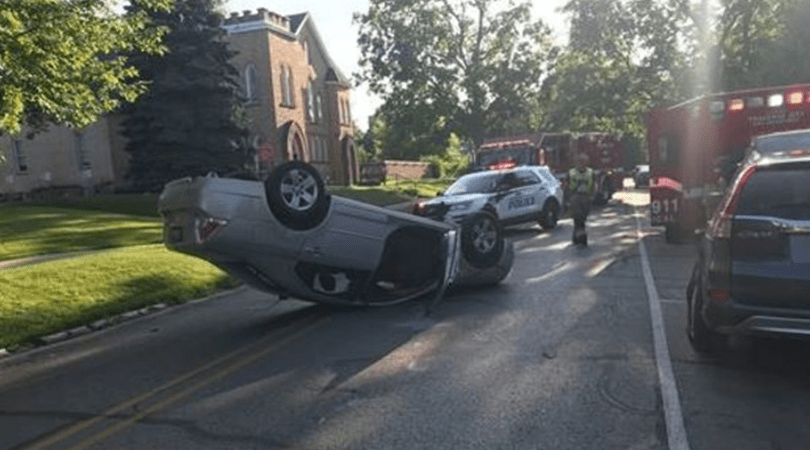 An 82-year-old Michigan woman went out of her way to avoid hitting a cute, fuzzy little squirrel while driving in Grand Traverse County. A nice gesture. A squirrel is one of God’s creatures. Generally speaking it doesn’t deserve to be flattened and have its innards shot out its mouth, ass, eyes, and ears like a six-holed tube of toothpaste having a cinder block dropped on it just so you or I can get home to sprawl out on the couch and fall asleep covered in Cheetos in front of the TV thirty seconds faster. That’s not fair.

And take it from someone who has accidentally run over a squirrel. That’s what happens. And you can feel it. The crunch of its spine. The fleshy pyrotechnics. You can feel it. If not physically than emotionally. It’s not a great feeling.

But also, when attempting to avoid vehicular sciurinicide it’s wise to do so with caution. Braking slowly is a great option. Honking your horn at the frightened rodent may also be effective. Do not, however, under any circumstances, swerve wildly into a parked car and then flip your own vehicle. If you die that squirrel will absolutely not care. In fact, there’s a decent chance it’ll run off and get eaten by a hawk twenty minutes later. It would also feast on your rotting corpse for an entire winter if it needed to. It’s really not worth it.

The aforementioned Michigan woman can attest to this. She did, in fact, flip her car to avoid hitting a squirrel. Undoubtedly she regrets it. The woman was driving down Washington Street in Traverse City, Michigan when she saw a squirrel in the road and immediately yanked hard on her wheel. Then she hit a parked car, which in turn flipped her car over. Now, here we are.

The woman is a tough old broad though. She refused to go to a hospital and didn’t suffer anything more than a couple scrapes and bruises. Traverse City Police gave the driver a citation for driving without due care and caution. The squirrel lived.