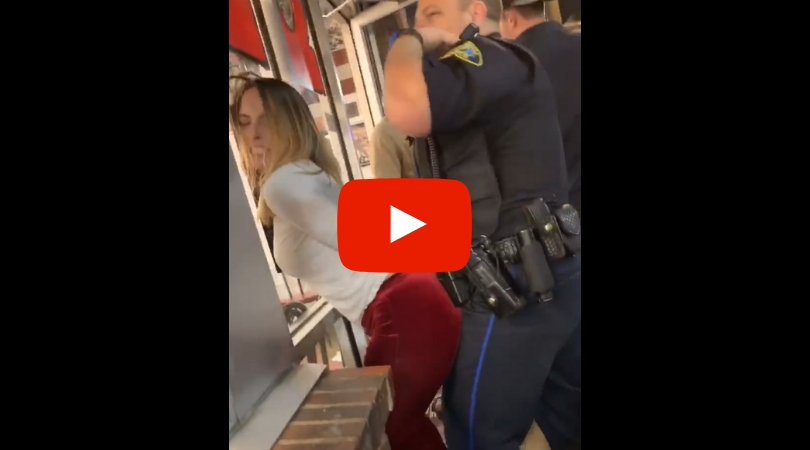 Drunk people are the best. I love scrolling through my Twitter feed and finding these type of stories, because well, it makes me feel better about myself. At least I’m not the one facing charges for grinding on a police officer, that’s April Teale. The 24-year-old from Alabama was recorded literally grinding her butt into the crotch of a cop while he was attempting to handcuff her. So classy.

Teale was arrested by police on misdemeanor disorderly conduct and harassment charges. The University of Alabama graduate was stopped outside a Waffle House in downtown Tuscaloosa, just a few blocks away from Bryant-Denny Stadium where she attended the Crimson Tide and University of Tennessee football game. As seen in the video, which has since gone viral, Teale was pinned up again a window as a police officer sought to handcuff her.

She then begins to press her butt into the cop’s groin while saying, “Oh, yeah, you like that? You like that, yeah?” The nerve on this woman amazes me. Tuscaloosa authorities declined to release Teale’s arrest report, so it is unclear if either of the misdemeanor counts filed against her is related to the lap dance or not.

But, between you and me, we all know it was. That cop must have felt so humiliated. I would have just smacked her in the head, but then again, that would probably get this poor cop sued in a jiffy. So, she was quickly arrested but was later released on a $1000 bond and is scheduled for a hearing on December 9 with the Tuscaloosa Municipal Court.

April Rose Teale, an Alabama grad, is the 'You Like That' Girl who was grinding on a Tuscaloosa cop during arrest https://t.co/QrVSiTA8Q3 pic.twitter.com/V2KFOTDSYz

Finding the whole situation hilarious, Teale is seeking to “offset her legal costs” via donations from her “fans” on her Instagram page. She stated, “Went through some legal trouble, if you wanna throw me $5 bucks, Venmo me. I’d like that.” I mean, her parents must surely be proud of her. This isn’t even funny, it’s just plain stupid and insensitive. Some people are really bad drunks, and this is the perfect example of it.

This article was originally published on October 23, 2019.