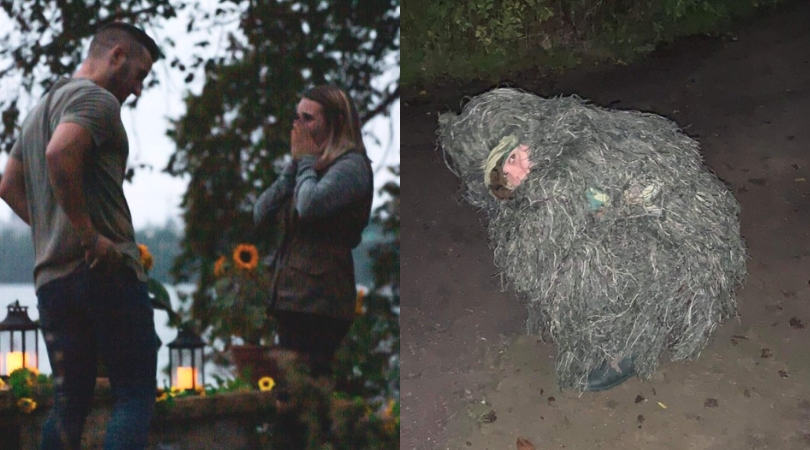 Talk about commitment, this is how you do it, ladies and gentlemen. When Terese Merkel found out that her sister’s boyfriend was planning a special proposal, she knew that she needed to be involved for the special day. Her actions as to how she was going to be involved quickly made her internet famous. Something we all want, admit it.

The 23-year-old from Wisconsin said she and her older sister Rachel are the best of friends. They are so close that one of Rachel’s proposal requests to her boyfriend, Andrew Philibeck, was that she be there when she said ‘I do.’ While secretly planning the engagement, Merkel hilariously mentioned to Philibeck that it would be funny is she was a bush hiding in between trees.

Being a guy, and thinking the idea was pure genius, a few days later he sent her a picture of the brand new Ghillie Suit he had bought her. Usually, Ghillie suits are camouflage outfits that are worn by hunters who blend into the foliage. So, a month later, there were Philibeck and Rachel at a scenic spot surrounded by flowers lanterns…and a talking bush.

Sister got engaged this weekend and I dressed as a bush in the wilderness to watch/capture the moment. We are 1 yr apart.. why are our lives so different rofl pic.twitter.com/cE14RBZ9CL

After Philibeck asked Rachel the question, the hidden bush quickly leaped up in the air yelling, “SHE SAID YES!” This basically scared her sister to death, but she was glad she was able to witness the special moment.

So, seeing as to how hilarious and genius this is, Merkel then shared some photos of the moment and her disguise on Twitter, and well, they went viral, of course. I mean, it’s truly impressive, someone give her an MVP metal or something. It’s called true love, man.

Twitter being the place it is, quickly became infested with more photos of people showing similar types of ways they snuck in to see their loved ones getting engaged. Take notes, future husbands.