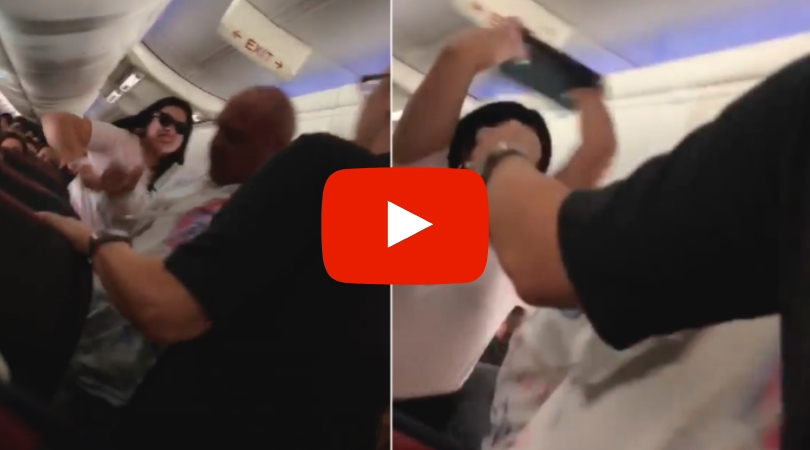 This woman was not having it at all. She was just so tired of her husband ogling other women, that she decided that he needed to learn his lesson quick and hard. Literally. So that is exactly what she did. She took a safe environment and basically wrecked it for all airline passengers.

The couple was on an American Airlines flight that was just about to depart the Miami International Airport to Los Angeles but was quickly stopped after a couple began to have an altercation. Video taken by passengers on the fight shows Tiffany McLemore arguing and cursing at her poor poor embarrassed hubby, while several flight attendants stand nearby monitoring the situation. One of the attendants asks McLemore to refrain from poor language since a young child was sitting behind them.

Not listen to them at all, because this woman was determined to shame her husband, continues to bash the poor man and even tells him to “never come to her house again.” So, trying to fight back the only way he can, the husband just takes it all in, and says “you’re out of control.” Which we all know, you never tell a woman that she’s out of control or that she’s crazy because then she’ll actually go bat shit crazy on you.

Flight attendants finally ask the man to get up and move seats, to which he quickly leaps over the woman and begins to walk away saying McLemore was assaulting him. The wife then get up in a rage and pretends she’s Forrest Gump by running up to him and smacks him with her laptop repeating, “I’m assaulting you!?” That man didn’t see it coming one bit!

Unfortunately, the laptop also hit a flight attendant, but luckily she was not seriously injured. So, safe to say both McLemore and her husband were pulled from the flight, which was able to depart a few minutes later. Police say McLemore’s husband was uncooperative and did not want to press charges. Probably in fear that he would be hit with something more powerful than a laptop. He was rebooked on a later flight, but American Airlines refused to rebook Mclemore, because duh.

The meeting back home is sure going to be awkward. Three bucks this man is going to get home, pack his bags and just leave before the wife gets there. Ah, the wonders of marriage…and social media.