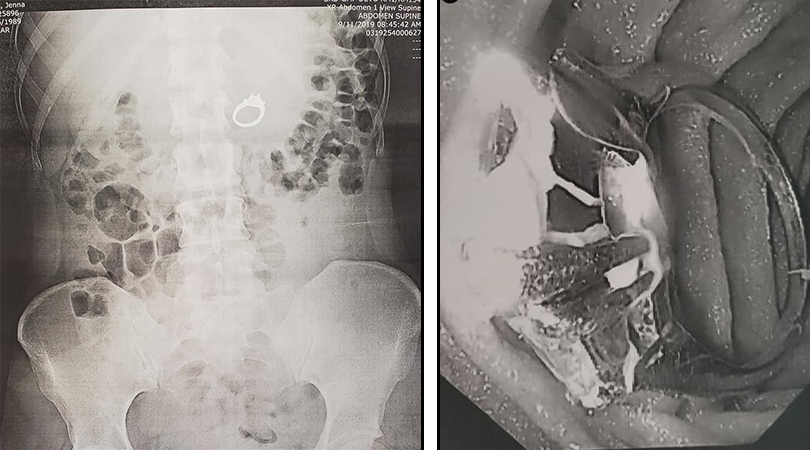 What’s the most expensive meal you’ve ever had? Guaranteed it didn’t cost as much as this California woman’s unconscious midnight snack. Jenna Evans wasn’t eating some corny “gold plated” steak or gelato sprinkled with gold flakes — the sorts of things expensive restaurants put on the menu to get attention on social media. She just straight up ate her engagement ring. Diamond and all.

Apparently Evans was having a dream that she was on a train with her fiancé Bobby when some “bad guys” got on. Bobby told her that she had to swallow the ring in order to save it from the bad guys, so she did. In a lengthy and hilarious Facebook post Evans said that she remembered swallowing the ring but assumed that it was just a very realistic part of her dream. (It was not.)

When she awoke the ring wasn’t on her finger. She looked around for a minute and then finally realized that, yeah, she ate it. Evans and her fiancé had a good laugh about it but then her stomach started to hurt so they figured they should go to the hospital and get that hunk of metal out of her.

After the doctors took what to be a top ten all-time x-ray in their careers they decided Evans needed an upper endoscopy to retrieve the ring. (Pooping it out was not an option.) So they put her under and fished the sucker out. Evans was not a fan of the anesthetics but otherwise came out fine.

But oof, what a burtal way to almost lose an engagement ring. Covered in poo and bile, pulled out of you with a surgery that sort of just made the ring cost like ten times more than it was originally purchased for. All’s well that ends (mostly) well, though. Congrats on the wedding!

This story was originally published September 16, 2019