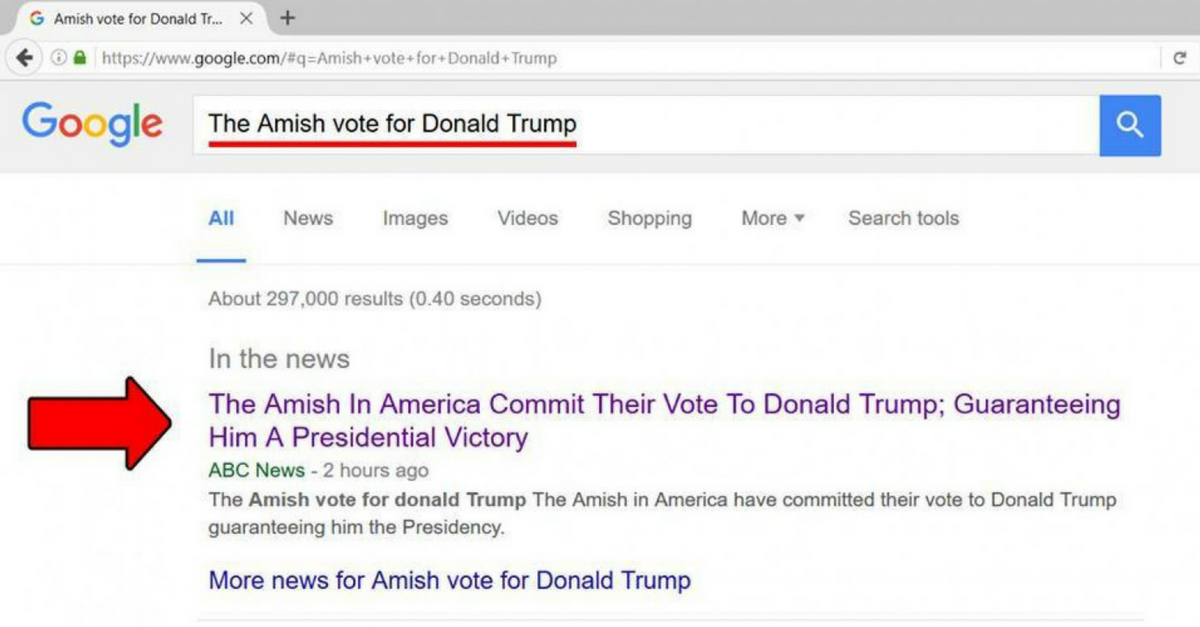 The phrase ?fake news? has been thrown around a lot in the last couple of years. It seems like a good time to offer up some tips on how to recognize some of the more obvious ?fake news? options out there.

We should have a contest as to which of the Networks, plus CNN and not including Fox, is the most dishonest, corrupt and/or distorted in its political coverage of your favorite President (me). They are all bad. Winner to receive the FAKE NEWS TROPHY!

1. If the source is known to be shady

Certain sources are known to play it fast and loose with headlines and facts. Others just make up stories wholesale.

One way of reviewing the quality of a source is to check its name against PolitiFact?s Fake News Almanac. It doesn?t mean every story on each site is fake, but there has been evidence found that these sites try to fool readers. Read with caution.

2. Other stories from this source are questionable

Look at the tone of the articles on a website to get a sense of what kind of stories they write. If they?re featuring stories about aliens, miracle cancer cures and the like, you’ll get a sense of the seriousness of the publication, which is a good indication of its integrity.

As an example of what might be a big news story, let?s say that a site you are on ? SuperNews.com – is reporting that LeBron James has had a heart attack.

Start by Googling ?LeBron James heart attack? and see what comes up. If sites like The New York Times, ESPN or the Washington Post are running the same story, it’s likely true. However, if they are all using SuperNews.com as their source, that puts you right back where you started.

RARE POV: ?Fake news? is a problem, but fixing it shouldn?t mean giving up free speech

You need to find a reputable source that has done its own reporting on the story to ensure its truth and accuracy.

A fair number of fake news stories hook readers in because they predict a future disaster. Yes, some of them are pretty incredible and seem obviously fake. But many of them play on your fears in an attempt to get an emotional reaction.

Consider any disaster story carefully, especially if it’s paired with a specific date. More often than not, it?s fake.

5. It reveals the cure for a major illness

This is another tried-and-true method for fake news to elicit that emotional response to get you to click on it. Maybe one study found promise in a cancer treatment that involved eating an apple a day, for example, but the ensuing story blew it all out of proportion.

It’s not fun to always be suspicious about what you read, but it’s generally pretty smart.

The Onion, the best known satirical site, has become the brand name in satire. However, even they don?t prominently display a label on their site that the articles are satirical. Less honest sites that are not widely know satirists can play on this confusion.

If you’re not sure about a website’s legitimacy, search around to see if there’s any kind of disclaimer. If you find one, that likely means the site can’t be trusted, even if the disclaimer is worded confusingly. Legitimate sites don’t need disclaimers.

Polling questions and results can be incredibly misleading depending on how the questions are phrased. There are very few pollsters with good reputations.

When reading a story based on a poll, check to see who conducted the poll, the number of people surveyed, how they were selected and how the survey questions were phrased. If you have that info at hand, you should have a good idea as to the reliability of the story.

Read domain names carefully. If a story originates on a site where the last two letters are .ru, that?s a Russian site.

Other tricks include incorporating a real website?s address into its address ? such as cnnrealnews.com instead of cnn.com.

Another is nearly using the name of a legitimate news site but misspelling it.

9. It makes you angry

One of the biggest ways fake news sites have been effective is by tapping into people?s fears and emotions. Many false news stories purposely play on our fears and anxieties, knowing that doing so will make people follow their emotions.

Take a deep breath, step back and evaluate what you?re reading and who is writing it.

In addition to the Politifact site we mentioned above, there are other sites out there that are devoted to debunking fake news. The oldest and most well known is Snopes.com, founded in the mid-1990s by David Mikkelson to fact-check urban legends. Another is FactCheck.org, a project of the Annenberg Public Policy Center of the University of Pennsylvania, which tends to focus more on scrutinizing the statements of politicians and other public figures.