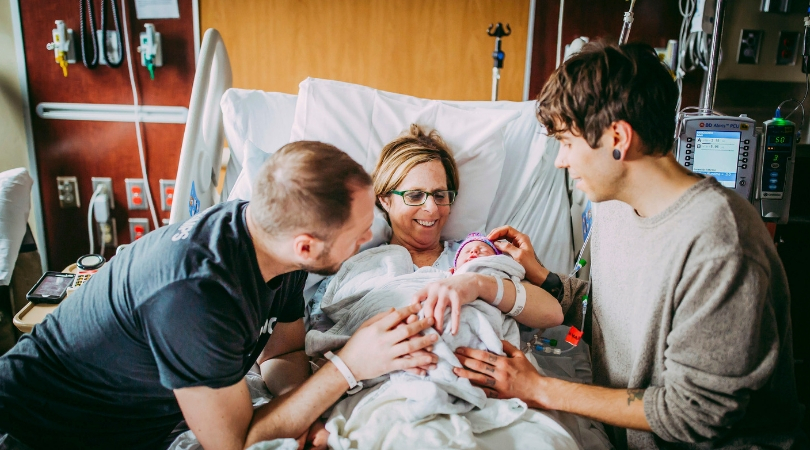 It looks like this Omaha, Nebraska family, really wanted to keep everything in the family, after a 62-year-old grandmother served as a surrogate mother for her son and his husband. Matthew Eledge and Elliot Dougherty had wanted to become parents for a while when Eledge’s mother and Dougherty’s sister decided to help the couple out.

In the end, the family decided that the then 60-year-old, Cecile Eledge, would be the designated surrogate. At the time, she had gone through menopause but was approved as a surrogate by doctors after extensive screening. Dougherty’s sister was the egg donor. Doctors then used Eledge’s sperm to fertilize the egg and the embryo was implanted. See…family on family on family.

Cecile gave birth in February 2019 to the nearly 6-pound baby, Uma Louise Dougherty-Eledge, at the Nebraska Medical Center in Omaha. The couple had initially planned to find another surrogate to deliver the baby, but found the process was confusing and weren’t confident about navigation in vitro fertilization as gay men.”

Doughtery lost his mother recently but stated he found comfort in seeing how much baby Uma resembles his family as well. Both dads said they do anticipate several difficult conversations and narrowly minded fractions over their daughter’s unconventional birth story, but are prepared to explain it to Uma when she is older.

?I?ll tell her Aunt Lea gave a piece of her,? Eledge stated, ?She gave a seed to start the gift of life, and her grandmother provided the loving garden for her to bloom, and I think that?s gorgeous.?

This is really inspiring to see, a family working together to create a miracle for one another. Goes to show you that some people will go lengths to see you and the people around you happy.

Congratulations to the whole family!

Editor’s note: This article was originally published on April 1, 2019.