Driver Spots a Cloud That Looks Like an Angel 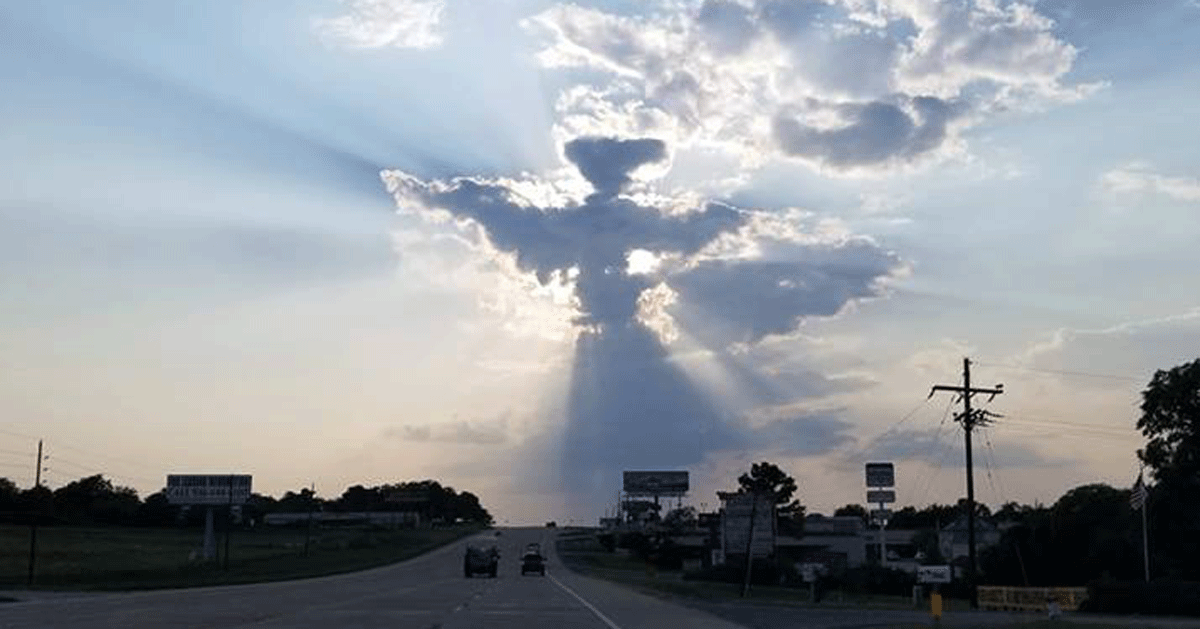 Sometimes, the sign you need is not the one you’re expecting to see. Especially when that sign covers the entire Texas sky in a gorgeous display of angelic light. It was this exact sign that took Danny Ferraro and his wife Carmen by surprise on Highway 105 outside of Montgomery, and he shared the post to Facebook immediately, calling it the Texas Angel.

One look at this unusual cloud formation, and it’s undeniable. Even the halo seems to be in the right spot, with arms spread wide just like Julie Andrews in the Sound of Music. This majestic photo means a whole lot more to the Ferraros than just one sunset on Texas State Highway 105.

The Texas skyline has never looked more promising and beautiful than it did with those brilliant rays poking out from this unique cloud formation. The heavenly figure appeared just when the Ferraros needed it, proving indeed that being in the right place at the right time matters.

They shared their story with Today, telling NBC News that,

“On Monday evening we were heading to deal with more (family) issues and really dreading it. As we turned west on Highway 105 in Montgomery, I immediately noticed the cloud formatin and the brilliant rays of sun straight ahead of us, and I told Carmen, ‘Wow, look at that!’…

“We both saw the angle and felt it meant that everything would be OK. I just felt like God was saying, ‘I’m always with you.’ I don’t know how many others saw it, but I’m sure it meant something special to everyone who did…

It lasted for just a few moments, but I grabbed my phone and the first picture I took was spectacular.”

Ferrao continued to note that the stunning photo seemed to be God speaking to the couple,, especially since he and his wife consider themselves Christians. And when it comes to down to it, the father of seven children needed to see that in that exact moment.

No matter what or who you believe in, life is a majestic ride and sometimes if we’re lucky enough, we can feel those sweet angel rays on our faces like this sweet moment captured by Danny and Carmen Ferraro.