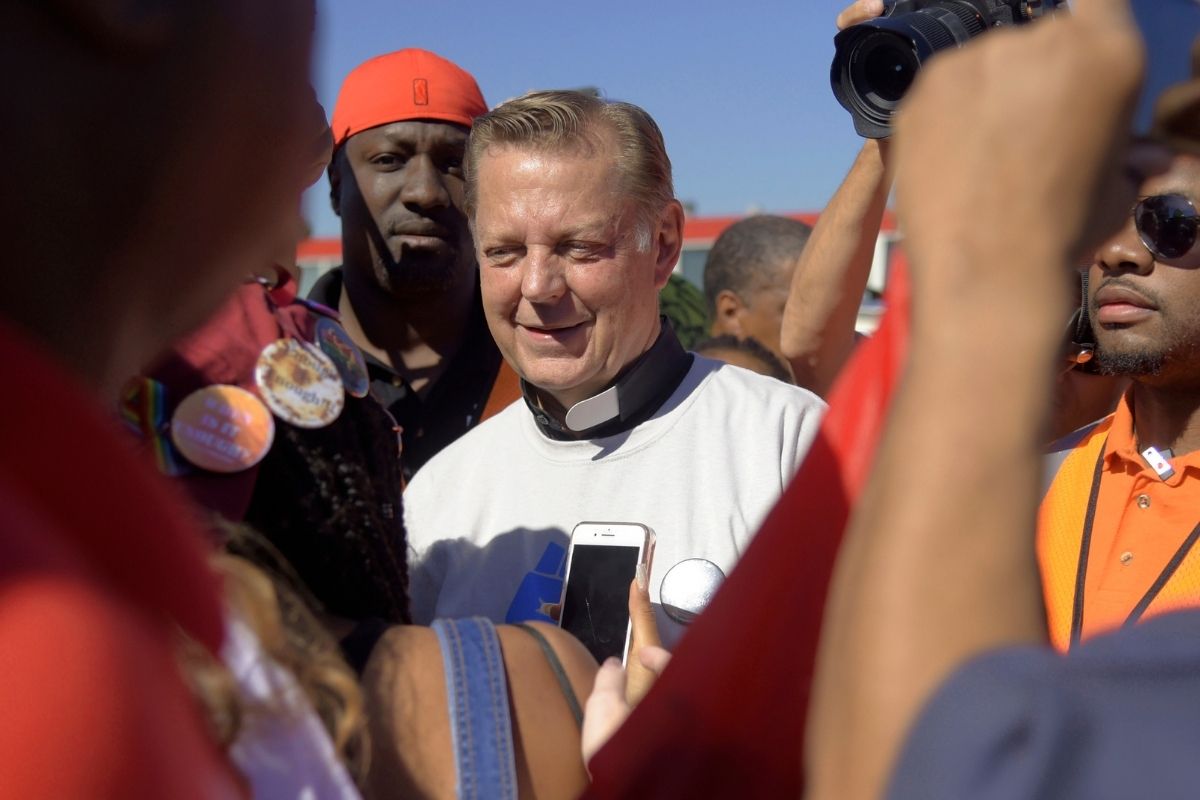 The Catholic Archdiocese of Chicago has reinstated Father Michael Pfleger at St. Sabina Church, amid the sexual abuse allegations made against him five months prior. They concluded that there was “insufficient reason to suspect” that the accusations were true after an independent review board investigated the story that two brothers came forward with about Pfleger had sexually abused them decades ago when they were underage. According to the Tennessee Tribune, a third man had also come forward with allegations of sexual abuse a couple of months later.

Cardinal Blase Cupich explained that Pfleger would be allowed to return to the pulpit on Chicago’s South Side the weekend of June 5th, the Feast of Corpus Christi. In a letter to the St. Sabina parish, he also noted that he asked Pfleger to take the next two weeks to “prepare himself emotionally and spiritually to return” to ministry, but not everyone’s so sure that this was the right decision.

Eugene Hollander, who represents the two accusers who made the child abuse claims, explained in a statement about how they are “shocked and deeply disappointed” in the church’s decision. He said in a statement, ?Both of the brothers who made these allegations were extraordinarily credible. They provided detailed accounts of the sexual molestation as well as information that only these victims would be aware of. My clients not only corroborated each other, but both clients underwent polygraph examinations and passed.”

Pfleger, however, is ecstatic to return to work, sticking to his truth while also noting how difficult the past few months had been for him. He said in a statement, ?I am innocent of the charges made against me and continue to believe that the [archdiocese] Review Board and the Cardinal will see the truth, conclude that these uncorroborated allegations are unfounded, and restore me to the ministry at St. Sabina,? adding, ?In the meantime, I know that I cannot emotionally or spiritually continue to remain isolated in an apartment waiting for this Board to do its job. While I hope and pray that the Review Board will work a little harder and more promptly to conclude their investigation, I will no longer wait in silence.?

One of the accusers told Vice, ?It?s a cover-up because of his popularity. They don?t see that side of him. They don?t know that side when I had bloody underwear. All they see is what?s going on with him now, what he has done since he has been at St. Sabina, the activist that he is now.?

This isn’t the first time that the Catholic Church has reinstated a priest that has been accused of sexual abuse, and Vice named many more reverends who escaped punishment. Chicago priest Lawrence Sullivan was reinstated 10 days before Pfleger but was accused of sexually assaulting a woman when she was only a 17 year old. Kentucky priest Joseph Edward Bradley was reinstated after two years when he was suspended for two reports of sexual abuse against a minor. He’s banned, however, “from entering a primary or secondary school for a period of five years,” according to a letter from the diocese.

The Vatican reinstated Joseph Hart from Wyoming, even against the lack of support from the diocese. Har faced 12 sexual abuse accusations, and although diocese officials found at least six of them credible, he was only rebuked and recommended that he should not, “have any contact with minors, youth, seminarians, and vulnerable adults.”

The list can go on and on, dating well back into the early 20th century. If priests are reinstated with recommendations not to return to places where children are, wouldn’t that mean that officials know that they were guilty? And what’s law enforcement’s role in investigating these potential crimes? Why are there always just “outside investigators” who review these cases? I’m sure these are questions that the victims have asked, just like I’m wondering now.

Watch: Illinois Man Kills Wife, Then Himself in Fear of Coronavirus Diagnosis