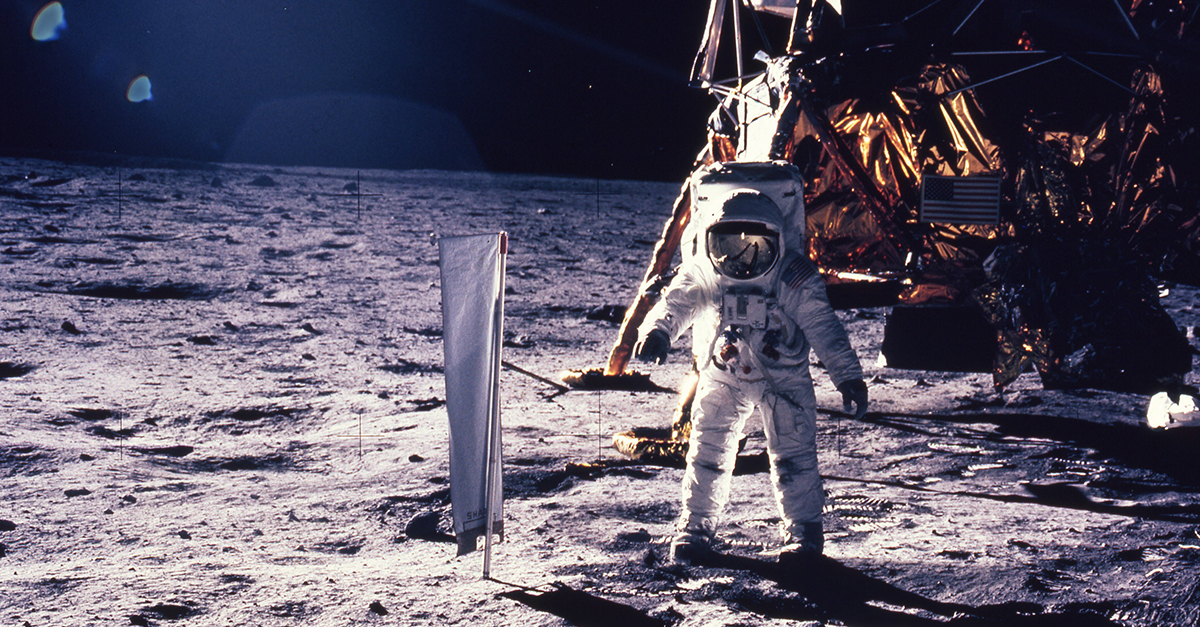 The Apollo 11 Mission occurred 8 years after President John F. Kennedy had announced a national goal of landing a man on the Moon by the end of the 1960s. Apollo 17, the final mission, took place in 1972. Kennedy had one stated, “I believe this nation should commit itself to achieving the goal, before this decade is out, of landing a man on the moon and returning him safely to Earth.”

At that time, the U.S. was still trailing the Soviet Union space developments, and the “Cold War-era America” quickly welcome the president’s proposal. In 1966, after 5 hard years of work by an international team of engineers and scientists, NASA conducted their first unmanned Apollo mission to test the structural integrity of the proposed launch vehicle and the spacecraft combination.

Unfortunately, on January 27, 1967, a fire broke out at the Kennedy Space Center during a manned launch-pad test of the Apollo spacecraft and Saturn rocket. Three astronauts were killed in the fire. Despite the setback, NASA continued to work on its mission and in October 1968 Apollo 7 orbited Earth, successfully testing the systems needed to conduct a moon landing.

By December, Apollo 8 had taken three astronauts to the moon and back, and in March 1969, Apollo 9 tested the lunar module while in Earth Orbit. In May, three more astronauts of Apollo 10 took the first space fast around the moon in a dry run for the heavily awaited July landing mission. That when on July 16, the world watched how astronauts Micheal Collins, Buzz Aldrin, and Neil Armstrong take off from Kennedy Space center on Apollo 11.

After traveling a whopping 240,000 miles in 76 hours, Apollo 11 had entered into lunar orbit on July 19. The next day, the lunar module eagle that was manned by Aldrin and Armstrong separated from the command module, where Collins had remained. Two hours later, the Eagle began its descent to the lunar surface and touched down on the southwestern edge of the Sea of Tranquility. That’s when Armstrong radioed back to Mission Control in Houston, Texas, saying, “The Eagle has landed.”
At 10:39 p.m. Armstrong quickly opened the hatch of the lunar module and made his way down the ladder.

Luckily for us down on earth, a camera attached to the craft recorded his moves and named the signal back to Earth where millions watched. So, at 10:56 pm, Armstrong stepped off the ladder and planted his foot on the moon when he spoke his famous quote. Aldrin then joined him on the moon’s surface 19 minutes later and took photographs of the terrain, planted a U.S. flag, and ran some scientific tests. The duo reportedly left a plaque on the moon as a reminder of their mission, which read, “Here men from the planet Earth first set foot on the moon—July 1969 A.D.—We came in peace for all mankind.”

On July 22, Apollo 11 began its journey back home and safely landed down in the Pacific Ocean on July 24th. Thus, changing history forever!

Watch: Memorabilia From Astronauts Neil Armstrong and John Glenn Up For Auction