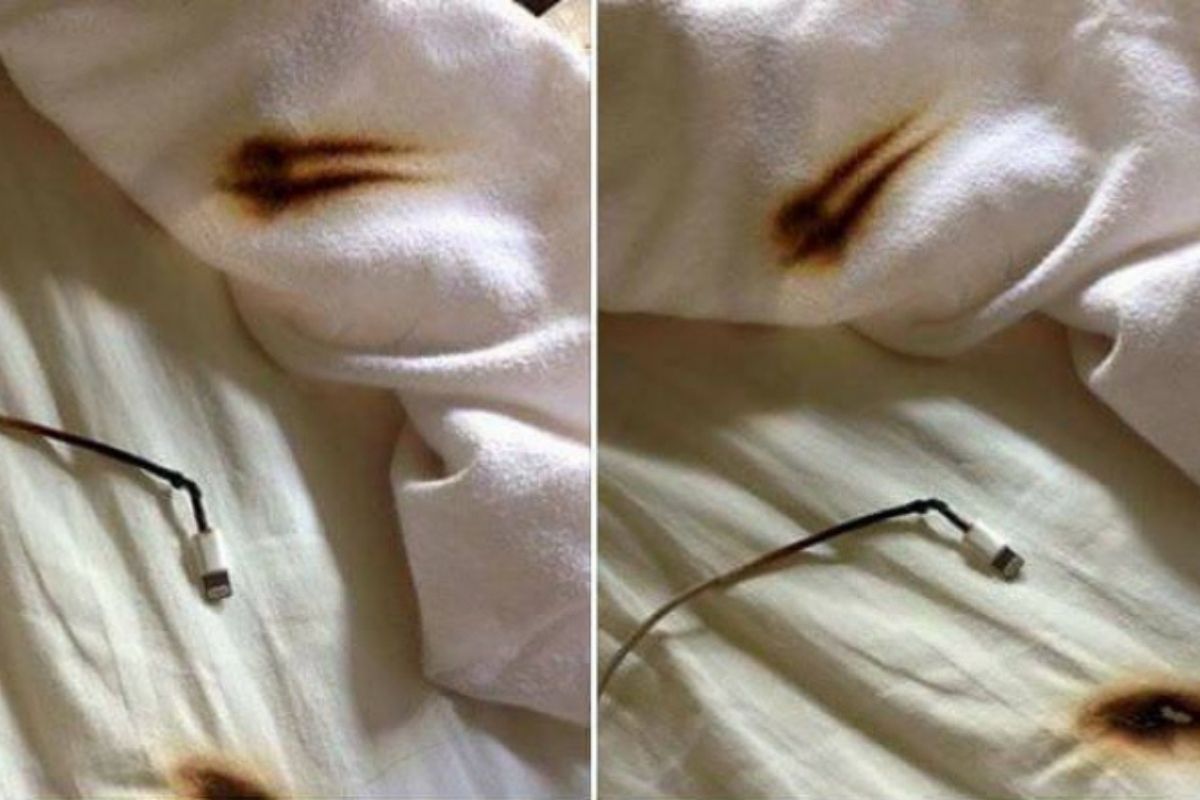 It?s become a habit for most of us, we?ll be in bed, scrolling through our Instagram or Facebook until we are finally tired enough to go to sleep. It happens ever so often that to some it has become a nightly routine. But, you might want to think twice before using your phone or tablet in bed. It?s no secret that these devices negatively impact our sleeping habits already, but according to a fire department in New Hampshire, they can also become a safety issue!

According to the Fire Department, research shows that 53% of children and teenagers charge their phones or tablets either under their pillow or on the bed. This could be a huge risk after the heat generated can’t disperse, making the charger become hotter and hotter. Meaning, anytime one comes in contact with a damaged electronic or exposed wire, they are at risk of a fire.

The Fire Department posted a scary warning, which quickly went viral on Facebook, showing photos of a bed and a charger completely burned. Authorities stated a 16-year-old had woken up to a scorching hot phone, which burned her hand as she tried to unplug it. Although it didn’t start a fire or smoke, it did leave some pretty alarming burnt marks on her pillow.

How do these phones catch fire? Well, situations like these could easily occur if you have a frayed or torn cable. To some of us, it’s easier to just tape part of the wire back together, or just leave it as is, which is a huge risk. Fire experts state it?s better to replace it then try to repair or mend it to avoid it from overheating.

Still, most phones with no defects probably won?t overheat or cause a fire, but of course, it?s not impossible. Plugging your phone and putting it down on your bed won?t do any damage, but the risk here is if it works overtime and slips under the pillow not allowing the heat to escape when the battery is drained, it can ultimately let off that heat. So, not letting off heat, and having a pillow or blanket on top of the device is just an accident waiting to happen.

Scary, I know! But don’t worry, there are several ways to protect yourself and your surroundings to avoid a situation like this. If you plan on charging your phone next to you at night, try charging it on a flat surface with no flammable material around, and try not to use your phone plugged in. I know, I know, it?s hard, but hey, it’s better to be safe than sorry. You should also avoid charging your devices in extreme environment conditions (too cold or too hot) and charge them out of a case that can generate excess heat.

Editors Note: This article was originally published on November 28, 2018.