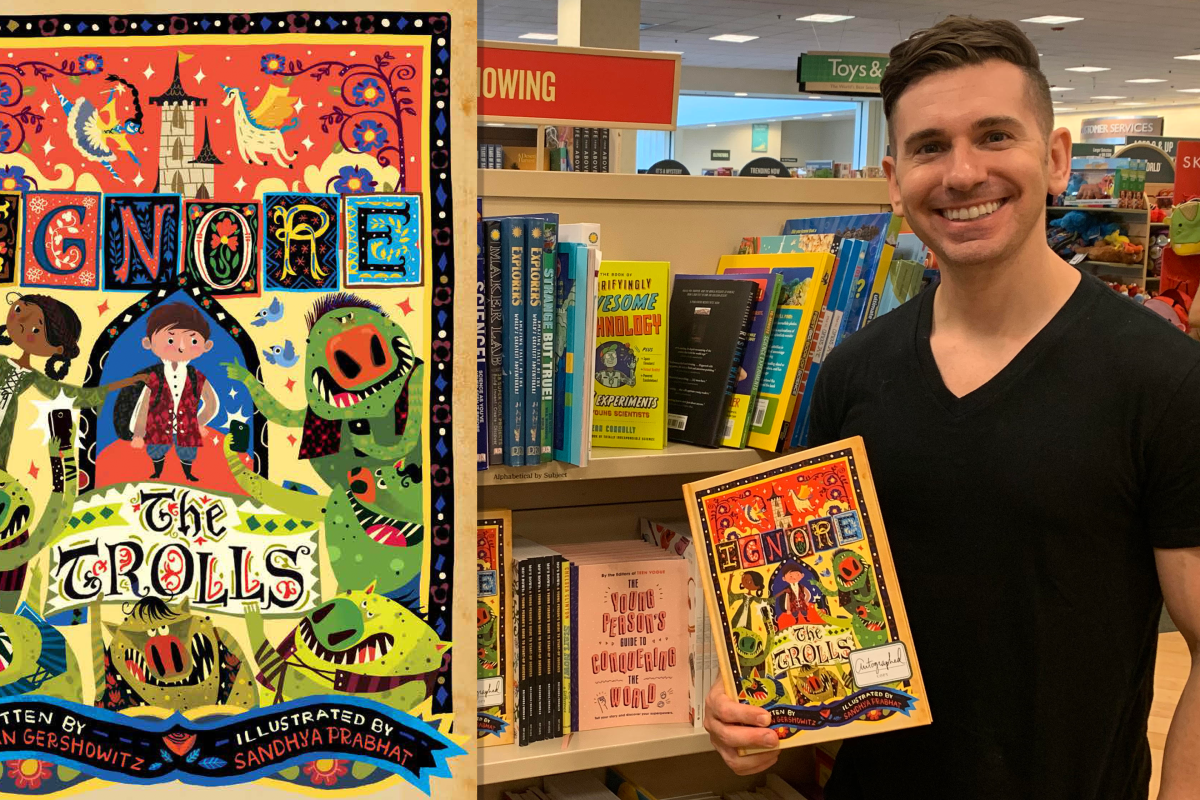 Being a kid today isn’t easy. Sure, it’s not “Polio and no air conditioning” hard, but there’s a lot of crazy stuff this generation has to deal with. The most absurd and menacing problem of all might be online trolling and cyberbullying.

Think about it. When someone called you a loser on the first day at your new school because you were the new kid in 1994 it was a totally baseless accusation. Sure maybe you weren’t invited to that sleepover or you didn’t know that all the kids hang out at Dairy Queen, but you could at least just insist that you had your own friends. Those bullies didn’t actually know if you had a best friend or not. And there certainly weren’t any random bystanders chiming in with a “Hey kid, you suck!” just for good measure. But not anymore! Thanks to cell phones, now the bully can open your Instagram and prove to you, statistically, that you are a loser. Bullies can torment kids 24/7 online with social media. Bullying prevention is harder than ever. That makes for a long school year for the new girl, so to speak. And that’s nothing compared to the literal hordes of strangers who can chime in to tell a kid that they’re ugly. Or worthless. Or whatever evil adjective they feel like using to destroy a random tween’s self-esteem.

With that in mind, screenwriter Jordan Gershowitz — known for writing for legendary kids TV shows like Tom & Jerry, Danger Mouse, Laurel & Hardy, and Sesame Street, as well as new hits like Nickelodeon’s Welcome To The Wayne, Warner Bros’ Bunnicula, and Disney’s Gigantosaurus — was inspired to teach 21st Century kids a lesson early on that is both timely and, really, timeless: Ignore the trolls.

Ignore the Trolls is one of the best books for kids released this year and should be on every parent’s book list if you think your child could use this message. (Who can’t?) The book’s anti-bullying message is one that’s hard to learn (for adults as well as kids) but one that’s as old as time. Sometimes the best way to stand up, and stand tall, to a bully is to ignore them.

We were able to catch up with author Jordan Gershowitz and ask him what inspired his first children’s book, Ignore the Trolls.

What inspired you to write this book?

This book was actually born from a dad joke. A friend of mine had mentioned they were getting troll’d to which I immediately imagined little green creatures under bridges typing angry comments on their computers. While the subject matter on cyberbullying is no laughing matter, the visual of these literal trolls made me chuckle. It was something that stuck with me for the next few weeks and I decided to check if anyone had used this in some form or fashion (and to my surprise, no one had). From there, I wasn?t exactly sure what I would do with this idea. I thought it could be a web comic or a greeting card, but then I remembered I?m not a great illustrator. As a TV writer, I thought about writing a pilot about this idea, but then the idea struck me to make this a picture book (which then could possibly become a TV series/movie because, well, IP!)

I knew I wanted to set it in the fantasy/medieval allegory approach, mainly because that?s the genre I most associate trolls with. I?m a fan of Lord Of The Rings and Game Of Thrones where knights and mythical creatures can live side-by-side so it made sense to set the story there. Fairy tales are also one of the most well-known types of stories. I thought if I could modernize the fairy tale to include current world issues, I would have something special that kids could really relate to.

I then crafted the overall arc of the story (a boy wants to be a knight, gets trolled as he tries to be one, learns to ignore them, and ultimately succeeds in his goal and becomes knight) and then set up a few meetings. I was extremely fortunate that my soon-to-be editor, Jordan Neilson, over at POW! Kids immediately saw the potential. She really helped with her notes and encouragement as this was my first picture book.

How did you balance an actually pretty serious — and dark — subject with being funny and entertaining, especially for kids?

While the book is fun and funny, it does serve as an allegory for some serious issues facing kids today. According to a study conducted by UNICEF, 45% of US students surveyed experience bullying at least once a month while 33% of those students were bullied on a weekly basis. I really just wanted to tackle this heavy subject that almost everyone deals with and find a more digestible way to 1) explain it to kids who might not totally understand this isn?t normal and 2) shed some light on the situation so we can best battle against it and 3) entertain people so it gets them talking about the subject of trolls. Did you have any experience with online trolls as a kid? How about now?

I wouldn?t say I dealt with a lot of trolls growing up. The cutting-edge technology was T9 texting and the only social media I had in middle school was AIM (AOL Instant Messenger). So your social circle was really the kids at school or the random friend of a friend you were introduced to. If kids were bullied, they had nights/weekends/summer to escape as opposed to the 24/7 onslaught kids may face today.

And while I wouldn?t say I was ?bullied,? there were various times where I dealt with Anti-Semitism. Luckily these were rare occurrences, but I could only imagine how harmful it could be on one?s psyche if they had to deal with that type of abuse every day. Hopefully, this book is able to shine some light on the subject, help combat it, and also bring comfort to those who are affected.

As of now, I feel like trolling has gotten worse and worse. Whether it?s a dude you went to high school with, a complete stranger, or a Russian bot, social media has allowed us to connect with anyone/everywhere, which has its perks and clearly has its negatives. While I haven?t been the target of extreme trolling, as someone who works in the film/TV space, it?s always hard to see something you?ve put a lot of time, effort, and love into get immediately destroyed by a random stranger.

Let me come back to you once I inevitably see some of the comments on this article.

Do you try to get into the mind of an 8-year-old or whomever when you write something like this?

For a book like this, I wanted to make sure it was as authentic as possible so I definitely spoke to some of my friends? kids as to what they?ve dealt with and how they feel about the subject. At the same time, I really just write from my experience. As I mentioned, I dealt with some Anti-Semitism growing up so I really focused on how I felt during those moments and brought those feelings to the story.

Will grownups get a chuckle or two out of this book?

I certainly hope so! Even when I?m writing for kids, I always try to write things that I would also enjoy and this one was no exception. In fact, I think I included even more references for adults since they are also afflicted by internet trolls. While this is a picture book, it can absolutely serve as a guide for people of any age!

What sort of trolling or bullying behavior would bother you the most if you were a kid now? Stuff from other kids you know? A bunch of strangers being really mean for no reason?

While I think it hurts more to hear mean comments from people you know, the issue with trolls is the sheer number of them. Hearing ?you?re ugly? or ?you suck? from one person you know is tough, but hearing it from 10,000 people all at once can really mess with your self-confidence. It?s like you?re drowning in sea negativity. And that?s where it?s important to ignore the first few commenters. Like I mention in the book, if you engage with one troll, you end up welcoming a whole hoard to inundate and trash your page like it?s some kind of zombie apocalypse (or how I assume Philadelphia looked when the Eagles won the Super Bowl).

How weird is it to you that this is, like, a thing for young children now? Especially when it comes to strangers bothering kids online?

The beauty of social media is that we?re all connected no matter our status. If I want to ask Taylor Swift to prom or thank Ryan Reynolds for photobombing your wedding, you can do that. But the flip side is people can also scream at 9-year-olds who are posting selfies with their friends. It?s insane that this is considered normal and the only way to get banned is by posting something so obscene it had to have crossed the line five lines ago.

While it?s one thing to speak truth to power online, it?s another to be a jerk (I?d use another word but I am promoting a children?s book). And to clarify this book and my definition of a troll is more about those type of users ? the kind who are malicious just for the sake of it. In no way is this book meant to be preachy or trying to purify the internet. We?ve all tweeted/posted/messaged dumb and/or mean things to people at one time or another and it?s important to remember that we?re not perfect. While most all social media users have made mistakes online, it?s important we continue to learn and grow with these platforms.

Instead, this book focuses on situations when kids (and adults) are faced with ongoing trolling. You can?t reason with them as they?re empowered by being behind the keyboard so the best thing to do is ignore them (or block them, but that maybe we?ll leave that for a potential sequel).

Give me your one sentence of advice you tell your own (hypothetical) kid if they were being trolled or bullied online.

Is there anything else to say other than ?Ignore the Trolls?? It?s not only the best advice, but I?m pretty sure I?m contractually obligated to say that.

Ignore the Trolls was written by Jordan Gershowitz with illustrations by Sandhya Prabhat, and published by POW! Kids Books. It is available for purchase on Amazon.

This article was originally published November 20, 2019.

Watch: 13-Year-Old Boy Commits Suicide After Bullies ?Encouraged? Him To