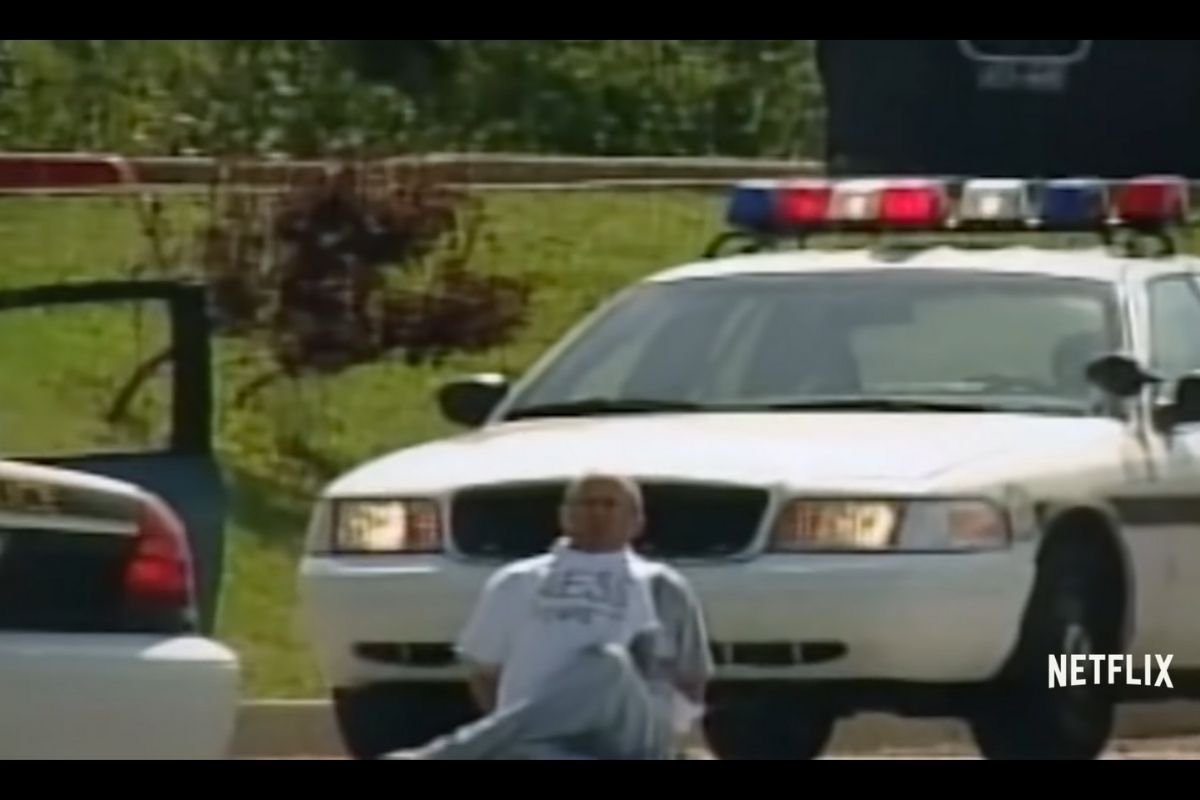 The story of the “collar bomb heist“ gripped the nation in 2003 when a pizza delivery man, Brian Wells, was murdered on live television. Labeled by CNN as “one of the most complicated and bizarre crimes in the annals of the FBI,” the case of the collar bomb (or “pizza bomber” as it’s sometimes called) is a difficult plot to understand. In addition to its infamous homemade explosive device, the scheme involved a bank robbery and a scavenger hunt and took place near Erie, Pennsylvania.

Brian Wells grew up in Pennsylvania. He’d worked as a pizza delivery man for 30 years and was employed at Mama Mia’s Pizzeria in Erie for 10 years prior to his death. Those who knew him have described Wells as a stable man with a calm life and a regular daily routine, which included his pizza route. And his family maintains his innocence, insisting that their relative was forced to rob a PNC bank after he was taken hostage and placed in a collar bomb on August 28, 2003. So what exactly went down before and after Wells entered the bank?

Co-conspirators Kenneth Barnes, Marjorie Diehl-Armstrong, and handyman William Rothstein were looking to make some fast money. The trio fancied themselves as misunderstood intellectuals. Diehl-Armstrong was the alpha. She had already been acquitted of murder charges (in self-defense) after firing six shots into her boyfriend Robert Thomas’s chest in 1984. Cold and calculating, she suggested that Barnes off her own father so she could gain her inheritance. In exchange for the murder, Diehl-Armstrong would pay Barnes $200,000 which she planned to obtain by robbing a bank.

But Marjorie Diehl-Armstrong never planned to rob the bank herself. For that, Diehl-Armstrong would use a scapegoat: a pizza delivery man. The extent to which Brian Wells participated in organizing the robbery — if he was involved at all — is still up for debate. While he appeared as a poor victim, police reports include two witnesses that say Wells had mentioned the robbery a month prior. He was also seen exiting Bill Rothstein’s house the day before the robbery.

On the afternoon of August 28, 2003, the co-conspirators called Mama Mia’s Pizzeria from a payphone. The owner couldn’t make out the request so he passed the phone on to Wells, who understood. He was asked to deliver two pizzas to 8631 Peach Street, the address of a secluded TV tower. And regardless of his intention, Wells became a bomb hostage for real at the end of that dirt road. Whether he believed that the collar bomb was fake (as planned) or not, it was quickly clear that Marjorie Diehl-Armstrong with a real explosive.

The bomb used consisted of a hinged, handcuff-like collar. Two pipe bombs and two kitchen timers were attached, along with creepy decoy items: loose wires, warning stickers, and a toy cell phone. Held at gunpoint, the destructive device was affixed to Brian Wells’ neck. Later at the TV tower, state police found evidence of a physical struggle between Wells and his captors although the details remain unknown.

Wells was instructed to rob the PNC bank in Erie’s Summit Towne Centre, claiming that he was the hostage a group of black men who had forced the bomb on him. Brian Wells also carried a large loaded gun shaped like a cane, which he used to threaten the bank teller while demanding $250,000. As Wells told the bank teller that she only had fifteen minutes, he reportedly lifted his t-shirt to leave the collar bomb. Unable to procure the full amount, the teller gave Wells a bag full of $8,702 cash. Wells exited the bank, sucking on a lollipop. Within 15 minutes, state troopers surrounded him in a nearby parking lot.

As he was apprehended, Brian Wells offered his fabricated cover story — that a group of black men had taken him hostage — and insisted that the bomb was real. “It’s gonna go off!” he cried desperately. These tough final moments were captured on live television as camera crews had arrived quickly at the scene. This video consists of 25 minutes of Wells sitting on the pavement, visibly distressed.

The device eventually started to beep wildly and detonated, killing Brian Wells. (The exact moment of the blast was not caught on video due to technical difficulties.) He died on the pavement at 3:18 pm. Three minutes later, the bomb squad arrived.

In Brian Wells’ car, nine pages of notes were found instructing the hostage to complete a scavenger hunt which lists a series of diabolical, timed tasks. The instructions read: “ACT NOW, THINK LATER OR YOU WILL DIE!” These pages revealed (or at least, attempted to reveal) a larger plot by Marjorie Diehl-Armstrong, beyond the first stage of a bank robbery. Diehl-Armstrong had many tricks up her sleeve. The murder of Brian Wells was not the only crime of violence that week. The deaths of two other persons are linked to the sprawling collar bomb case: Robert Pinetti, and James Roden.

Three days after the bank robbery, one of Brian Wells’ Mama Mia Pizzeria co-workers, Robert Pinetti, was found dead of a drug overdose. However, any possible connection to the conspiracy of Marjorie Diehl-Armstrong remains unknown. Then on August 20, 2003, Diehl-Armstrong’s partner in crime, Bill Rothstein reported that the body of a man, James Roden, was found hidden in his garage freezer. Rothstein then wrote a suicide note professing his innocence, although he never committed suicide.

As the mastermind of the brutal armed bank robbery, the life of Marjorie Diehl-Armstrong was scrutinized in the aftermath of the collar bomb heist. Considering herself a genius, Diehl-Armstrong had always been academically successful; she excelled in high school and obtained a master’s degree from Gannon College. However, her triumphs were long marred by crippling mental health issues. Diehl-Armstrong had severe bipolar disorder and was a compulsive hoarder.

In 2017, she died of breast cancer while in prison. She was 68 years old. Although Marjorie Diehl-Armstrong is remembered today as a serial killer, the epitaph on her grave reads “Death by the legal system.” Diehl-Armstrong and her pizza bomber operation are the subject of the Netflix true-crime docuseries, Evil Genius: The True Story of America’s Most Diabolical Bank Heist. Watch the trailer below.