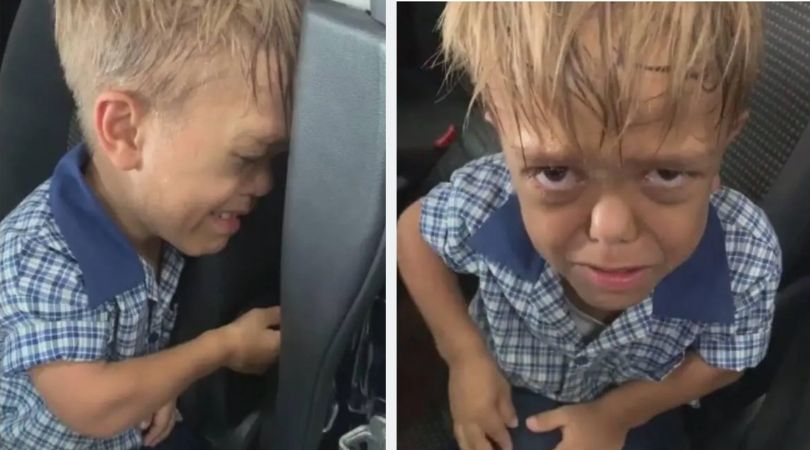 Oh man, I’ll admit it. This absolutely shattered my heart into little pieces. A mother from Brisbane, Australia is urging schools to teach kids disability awareness after her nine-year-old son came home crying, saying he wanted to die after being bullied by other students. Yarraka Bayles shared the emotional heartbreaking video of her son Quaden crying hysterically, in hopes to raise awareness of the effect bullying can do to a young child.

Quaden was born with Achondroplasia, a common form of Dwarfism. Bayles explained that he is constantly bullied by classmates for his disabilities. In the video, the mom is heard saying she witnessed a bullying episode, and immediately called the principal. She stated, “I want people [to] know, parents, educators teachers, this is the effects that bullying has, this is what bullying does.”

*Warning: This video contains sensitive content that may be disturbing and confronting for some viewers.*

The mother told local news she arrived at school to find a female student “patting him on the head like a puppy” and making derogatory comments on his height. The mother said Quaden’s sister and her looked at each other and asked the boy if he was okay. Not wanting to admit it, the boy responded no, looking horrified at them, and begged them to not “make a scene.”

“You could tell he was very uncomfortable but he was so good at trying to shrug things off, he doesn’t want people to know how much it’s affecting him, he’s so strong and confident but it’s times like these when you just see him crumble. It was just heartbreaking to watch, it made me feel helpless.”

The mother shared the video online showing bullying is, unfortunately, a constant situation, and Quaden has attempted suicide several times. She explained the boy first tried to take his own life at the age of 6 when his grandfather passed away, and several times since then. The bullying, according to the mother, usually consists of trolls name-calling him, and pointing out a difference in height. She noted, “I feel like I’m failing as a parent. I feel like the education system’s failing.”

While Bayles doesn’t blame the students or the school for the incident, she thinks the school needs to do more to teach students about disabilities to help them feel safe. Quaden has since been pulled out of Carina State School, and she is considering homeschooling him.

I was bullied too and suffered the after effects for years. Probably still do somewhere in my subconscious.
This child has a form of dwarfism and I'm heart broken for him. Even if the bullying stops, the damage is already done. https://t.co/CwvcMOEMSZ

As expected, the video quickly went viral on social media and has over 6 million views thus far. Comments flooded the video with positive messages of support, urging the boy to stay strong and reassuring him he was beautiful inside and out.

Despite receiving a lot of backlash from the emotional moment, the mother stated she plans on keeping the video up on social media to show the impact bullying can cause, urging parents to teach their children about the consequences.