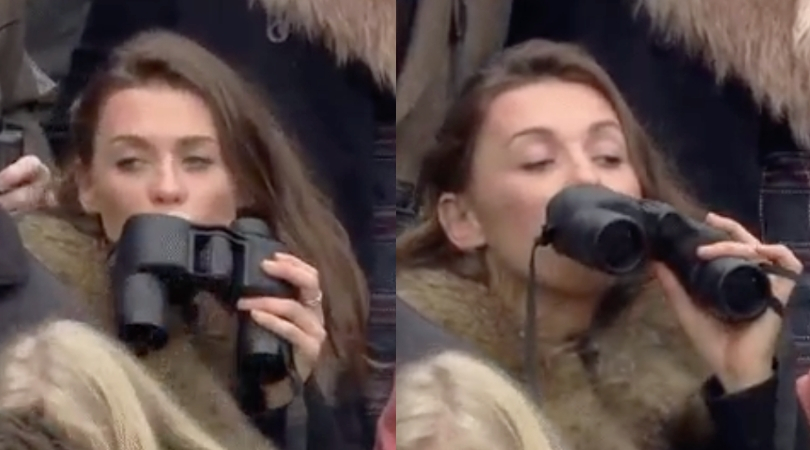 Okay, I?ll admit it, I have snuck in a flask here and there to several music festivals. Don’t judge me…you know quite well that booze is very expensive when it comes to buying it at a private venue! Admit it, if you have ever attended an event where there is alcohol, you know the venue sells it for much more than what you usually pay. Which means you’re left with two choices: either you pregame beforehand or you figure out a way to not spend so much.

So, when the opportunity presents itself to, you know, sneak in a little booze in and avoid paying seven dollars for a beer, you would. Because, why not? I have seen several people attempt to sneak in sunscreen bottles, popcorn bags, a small flask by tapping it to their stomach, and even wires stuck inside their bra. But this girl, let me tell you, she wins the prize of all prizes! She deceived everyone around her by using binoculars! Yes, three days in and she is already winning 2019!

The unknown girl was caught on camera watching the races at Cheltenham Racecourse and was caught on video by the ITV racing themselves. She is seen holding what looks like regular binoculars, before taking a swig from one of the lenses. Yup, instead of getting involved or cheering on the pre-race festivities, there she was, taking a sip from her binoculars. I am impressed, my hat is off to her, give her all the gin she needs to fill those puppies up!

Just think about all the money she saved by deceiving the security guards! I mean, I would have never thought to look inside some binoculars. Safe to say Twitter went wild and applauded her for her sneaky actions.

showing so much determination and the year has only just begun

Love this girl! Got to make the best of what you have 😂🙈

If you want to follow this mysterious girl’s footsteps and save a few bucks here and there, I?ve got you covered. Where do you buy these? Amazon, OF COURSE! They are selling the genius invention for as little as $12.95! That?s at least three beer or two wine glasses right there. Say goodbye to long lines, and wasting money you can use to get more booze.

They include a funnel and a shoulder strap which is actually perfect for carrying into the event. The binocular flask is double-sided for “twice the volume” making a total of 16 oz! The possibilities are endless…races, music festivals, picnics, you name it! Think of all the money you will save! What a great way to start the year, huh? Thanks, binocular girl!

Editors Note: This article was originally published on January 3, 2019. We brought it back to give you a good laugh!