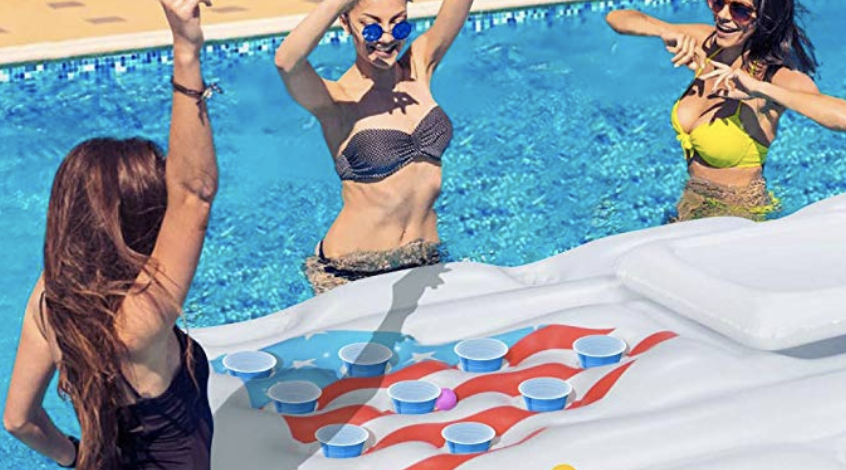 Who throws the best barbecues in your neighborhood? It’s not that smug jerk Bob anymore, with his stupid built-in grill that doubles as a brick oven you can cook pizza in. It’s you now, because you just bought this inflatable beer pong raft that has a central cooler in it and turned your weak pool into a giant frat party straight out of a ’90s MTV Spring Break episode. You are a summer party king — a pool party God — and Bob got so upset that he fired up his brick oven and jumped inside it. Bob is a dead pizza now. Justice.

Beer pong rafts have existed for years, of course, but this particular beer pong pool float felt worth writing about because it’s pretty much the best one I’ve ever seen. It takes pool pong to the next level. It’s better than an actual beer pong table. The cooler in the middle, the cup holders all around the outside, and the patriotic design all put it over the top. This is the key to your swimming pool becoming the coolest place in the neighborhood. It’s a mini party barge.

The raft also comes with ping pong balls so your pong game is ready to start the minute you put air into this inflatable beer pong table. The pong float turns your pool into an outdoor game room. Customer reviews have said that this inflatable floating beer pong table is the best thing to happen to swimming pools since Polio was cured.

And I’ll be honest, guys. This is how I make money. Okay? That’s how this industry works. I should’ve gone to law school but I’m a whimsical moron. If you don’t buy this beer pong raft I don’t get health insurance. Even if you don’t play beer pong your kids will love it. Just like my kids will love being born in a hospital instead of my parents’ garage. So be a buddy?

But yeah, either way, upgrade the hell out of your swimming pool and summer 2019 with one of these bad boys.