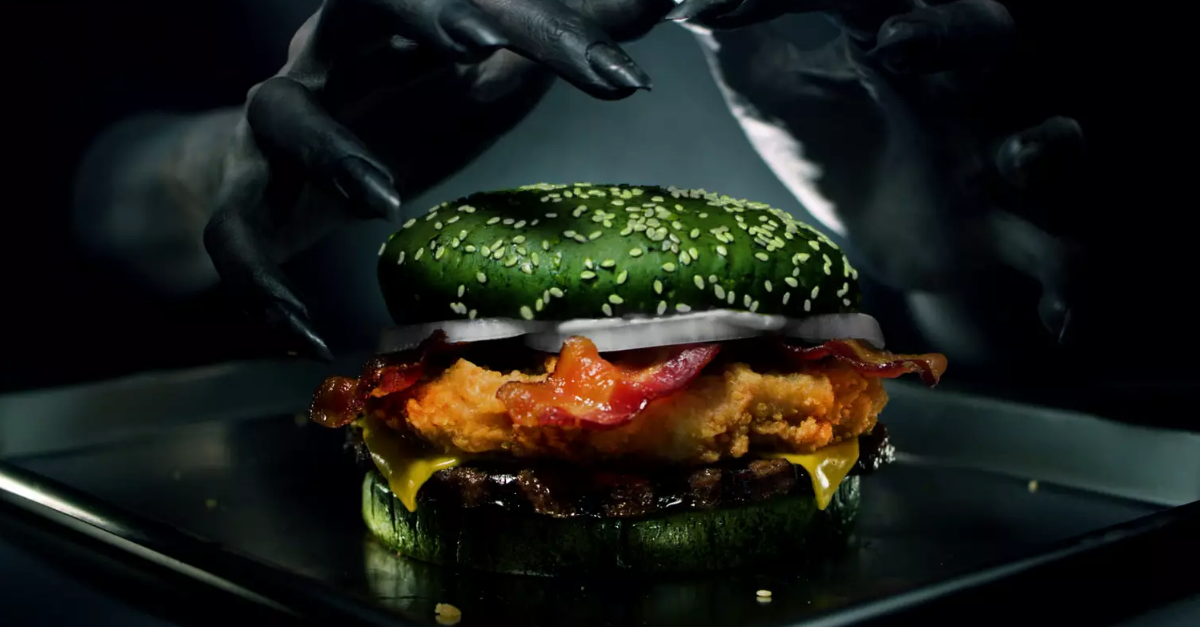 In the spirit of Halloween, Burger King has released a new burger that they claim will actually increase nightmares, because what’s going to happen to you on the toilet a few hours after eating it will haunt you forever. (I assume that’s their reasoning.)

The Nightmare Burger comes topped with thick-cut bacon, American cheese, mayo, a green bun, and fried chicken. The green bun, I assume, is mostly for aesthetics and to give your stool a troubling, spooky color. Really they should’ve made it red, though. People would’ve looked in the toilet and been convinced they’d actually poisoned themselves from eating such an abomination.

I do love the idea of this burger though. Fried chicken as a burger topping is an idea I’ll gladly get behind, especially at a fast food restaurant that, if you’re going there, decency has already been thrown out the window anyway. So why not go for broke? We don’t top our fast food burgers with enough insane shit, frankly. You want to give people nightmares? Top this thing with jalapeno poppers, onion rings, beer cheese, and spicy barbecue sauce too. The heartburn will have anyone over the age of 25 seeing demons the second their eyes close. There will be an actual lake of fire in their stomachs.

The nightmare thing is real, though, according to Burger King. The fast-food chain says they partnered with Paramount Trials and Florida Sleep & Neuro Diagnostic Services, Inc. and conducted a scientific (sure, sure) study. They observed the sleep of 100 participants over the course of ten nights. Eating the Nightmare Burger increased the likelihood of having a nightmare by 3.5 times, according to the study. That sounds impressive until you remember that eating a regular Long John Silver’s menu item increases the likelihood that you’ll have a nightmare by twice that.